Ebola outbreak: “The church has to help”

​The 2014 Ebola outbreak in West Africa is the largest and longest-lasting Ebola outbreak in recorded history. To further understand the scale of this disease, the Ebola outbreak is actually the first Ebola epidemic the world has experienced, as the virus has spread to multiple countries, including Liberia, Sierra Leone and Guinea. More than 2,400 people have died from Ebola during this epidemic.

The spread of Ebola presents several more complications than just battling and containing the virus itself. People in infected areas have been quarantined to their homes as towns shut down to try to limit the disease from spreading further. As a result, people are not able to work, harvest fields or purchase food. Other countries that ship food to the region are afraid to dock their ships to deliver food for fear of contracting the virus. The lack of food has been a growing concern as people are now dealing with food security issues that have been exacerbated by the spread of Ebola.

“We need food,” says the Rev. D. Jensen Seyenkulo, Bishop of the Lutheran Church in Liberia. “Our workers from all across the country are being asked to take off work during the crisis. The quarantined communities and stranded travelers are crying for food and water. The treatment centers need food. There is a saying around now that goes like this: ‘If we do not die of Ebola, we will die of starvation.'”

In August, Lutheran Disaster Response committed $10,000 to assist Global Health Ministries in the shipment of Personal Protective Equipment (PPE) to Liberia. Lutheran Disaster Response is now committing $90,000 to assist with food distributions in Liberia and Sierra Leone and with Ebola sensitization and prevention in Liberia, the country that currently has experienced the highest number of Ebola cases.

We will work with our companion church, the Lutheran Church in Liberia, to activate food distributions in six targeted areas of Liberia that will assist 999 households with a month’s supply of oil, rice and fish.

In Sierra Leone, we will work with our companion church, the Evangelical Lutheran Church of Sierra Leone, to provide food assistance also consisting of oil, rice and fish to 3,000 individuals.

“With no way to buy food, the church has to help,” says the Rev. Thomas Barnett, Bishop of the Evangelical Lutheran Church of Sierra Leone.

Ebola Sensitization and Prevention in Liberia

Liberia has seen the highest number of Ebola cases since the outbreak reached the country in March. Since the disease presents a 90 percent fatality rate, raising awareness about symptoms and prevention is vital. With our partner, ACT Alliance, we will work with Lutheran Development Services and the Lutheran Church in Liberia to provide Ebola sensitization and prevention training to 4,500 individuals in Lofa and Bong counties.

In addition to the training program, we will work with our companions and partners to construct an isolation unit at Phebe Hospital and School of Nursing. This unit will provide significant contributions toward the containment of the disease and the ability to provide life-saving care. 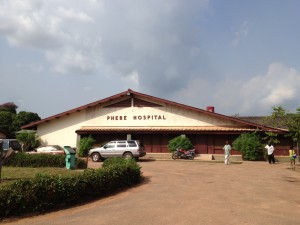 Please join us as we continue to pray for our brothers and sisters in Liberia, Sierra Leone and the rest of the West Africa region who are daily battling with the risks of Ebola and the many impacts that come with it.

We are afflicted in every way, but not crushed; perplexed, but not driven to despair; persecuted, but not forsaken; struck down, but not destroyed; always carrying in the body the death of Jesus, so that the life of Jesus may also be made visible in our bodies. 2 Corinthians 4:8-10