As Russian forces advanced on his town in Ukraine’s heavily contested Donbass region, a group of friends helped to save Igor Gusev’s life.

Born with cerebral palsy, Igor has lived independently with some limited support and the companionship of a beloved black cat. His community shunned him, but for the efforts of his few friends. 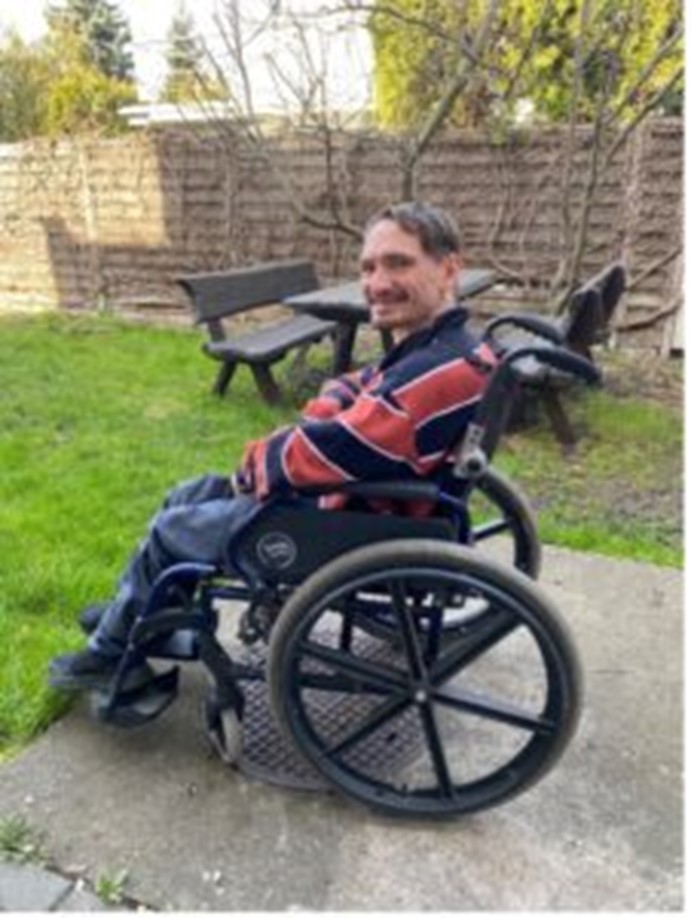 Igor Gusev fled Ukraine after the invasion by Russia and is now living in Poland.

As bombing and violence approached his home, Igor’s friends packed him and just a bit of luggage into a car and headed west.

While Igor sadly had to leave his pet behind, he found new friends – and support – in the L’Arche community in Poznan, Poland. The Polish L’Arche communities have rapidly transformed themselves into a network of emergency care for people living with disabilities and their caregivers.

Igor’s disability is physical, but he appreciates the care he receives for the soul, too. “In L’Arche I met sincere love, peace…and respect,” Igor said.

For most of his life, he has moved independently by crawling on his four limbs. His fully functioning left hand allows him to dress himself or hold a cup of coffee. Escaping a war, however, proved far more difficult to achieve independently. L’Arche’s nearly six decades of experience indicate that people like Igor have a greater challenge fleeing disasters like war, and finding access to services.

A volunteer organization in Poland came across Igor and, once understanding his needs, asked if L’Arche could help. L’Arche was able to find a place for Igor even as L’Arche Poland’s communities filled with refugees. He likes to live as independently as possible, but he reluctantly asked his new L’Arche friends for help moving around a house not fully adapted for someone in a wheelchair. L’Arche is making sure Igor and many others get needed care.

’Arche’s two communities in Ukraine have also been helping people fleeing war have a safe space to land and, in many cases, to continue to nearby countries hosting refugees. In Lithuania and Poland, the communities have also opened their doors, with even staff and volunteers hosting guests from Ukraine in their homes.

L’Arche communities in Poland have joined other local organizations to craft a tapestry of services aimed at supporting people with disabilities and their caregivers.

“In [the] Wroclaw community we have created a day-care place where every mother who needs at least a few hours of respite will be able to safely leave her child and take care of other urgent matters for her own and their good,” L’Arche Poland National Leader Agnieszka Karolak said.

You can find out more about the work of L’Arche around the world on their website.

Your gifts to Eastern Europe Crisis Response are supporting partners like L’Arche in eight countries, including Ukraine. Thank you!