Re-Post: Can We Talk About Climate Change?

Can We Talk About Climate Change? 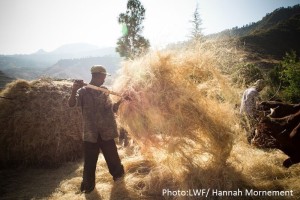 After an intense two weeks of negotiations at the climate change summit in Paris a historic agreement was reached but for the people of Northern Ethiopia it is already too late. They are already experiencing the effects of El Niño, a global climate phenomenon which has already driven up global temperatures and was made worse by climate change. Experts say that 2016 will leave millions hungry and cause water shortages and disease outbreaks.

In addition to their usual struggles Ethiopians many of whom already live in poverty are experiencing the additional effects of global warming. A country whose economy heavily depends on agriculture, with over 80% of its 93 million population small scale farmers and pastoralists, it is now bearing the brunt of this negative impact leading to increased poverty, water scarcity and food insecurity. By January 2016 the United Nations predicted that 15 million people will need food aid. This current drought is set to be the worst in 30 years.

“This is the worst harvest I have seen” said Woday Gelaye, 75, who has been farming in this area for over 60 years. “Because of the recurrent drought and the 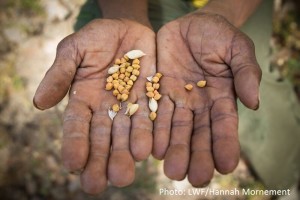 heavy, short rainy season even his chickpea crop has been put back.” Extending his hand he shows me just a few small chickpea pulses. This crop too is meager. Having had to sell his ox to buy additional food for his wife, eight children and four grandchildren he no longer has the help needed to plough his other 2 small fields – and nothing left to sell.

After the failure of his crops earlier in the season the Lutheran World Federation (LWF) provided Woday with 31kg of seeds.

His situation sadly is no exception. It is estimated that 73,000 people in this region of Ethiopia have been affected by the failed harvest due to the unpredictable climate, and will need emergency food aid to tide them over before the next harvest in a few monts. There are currently 768 people benefiting from the LWF Emergency Seed Program. Mr Gelaye is one of the lucky beneficiaries.

Just 2 hours down the dusty road from Meket to Lalibela, blending into the thirsty landscape a brother and sister live on a small farm with her 3 year old child. Debre, 21 and Baye, 19, are not part of the LWF Food Security Project and just weeks away from having absolutely nothing left. “The rain started late, we thought we were managing well, but when the crops were at knee level. The heavy rain came and destroyed everything. To survive we started to sell our goats, sheep and cows. My biggest fear now is that if the government doesn’t help soon we will have to leave – migrate to a nearby district or perhaps Sudan.”

Livestock are the life of these arid lowlands, but more and more families have to sell their cattle, leaving them even more vulnerable than before.

Things have to change if the people are going to survive generation after generation in this region. The LWF, who have been working in Ethiopia for 43 years and in this region for the last 10 years, are doing just that – with their Food Security Project. Budgeted for 3 years it was started at the end of 2014 and is benefiting around 4,670 people, just 2.7 percent of the district’s population. It is comprised of an irrigation scheme, irrigation agronomy and crop production, vegetable production, compost technology, conservation agriculture – introduced by CLWR (Canadian Lutheran World Relief) – water management, seedling production and distribution amongst other agricultural related tasks. All these projects are using tools that are available to the farmers, like manure. A team of LWF experts are teaching them how to get the most out of the land.

Shamble, 46, has already profited within the first year. He has been part of LWF’s Food Security Project in Midaghe for a year and was trained in irrigation agronomy along with crop and vegetable production.

“I was also trained in compost production and given an improved variety of drought resistant teff.” Teff is an important food grain in Ethiopia which is used to make the typical injera bread. “I have also benefited from the cash for work scheme, digging the irrigation trench, and working as a guard overnight. My life and my family’s life has really improved, I have built a new house and been able to buy some sheep and cows.”

Development projects like these are crucial if the future generations are to survive. Climate phenomena like El Niño are not new occurrences, but scientists say that global warming has contributed to making them larger and more damaging. Without projects like LWFs Food Security Program the people of Ethiopia face a bleak future. This is a country that has suffered for decades but is desperately trying to help itself. We cannot afford turn a blind eye. The lives and livelihoods of millions of people are at stake.

Hannah Mornement is the daughter of Adrienne Mornement who worked with LWF in 1985 in the Nekemte region, in Ethiopia. She went back to visit the program after 30 years.

Lutheran Disaster Response has already committed $70,000 to this project. It is our hope that as the need rises, we will be able to continually accompany out partner, Lutheran World Federation in creating food-secure communities.

Your gifts are needed now to help with immediate relief to assist those directly impacted by the droughts and other climate change related disasters. Gifts to Lutheran Disaster Response will be used to provide immediate, life-saving aid.

Read our past blogs