ELCA Blogs / Lutheran Disaster Response / And then came the rain…

And then came the rain…

February 19, 2010
Wednesday night, Haiti’s capital experienced its heaviest rainfall since the earthquake, a soaking downpour that lasted for several hours. The storm, the second this week, foreshadowed things to come when the rainy season sets in next month.

“It has rained before, but not so hard and so long,” said Marie Lucie Osias, 37, who lives in a makeshift shelter in the Delmas 40-B encampment in Petionville, with her 10-year-old son. Her other three children died in the quake.  “Our clothes got wet, everything got wet. I just tried to keep the water out the best I could,” she said. Whenever water started to pool in the tarp that serves as her roof, she would push it up with a stick and try to make sure it ran off to the outside instead of coming in. 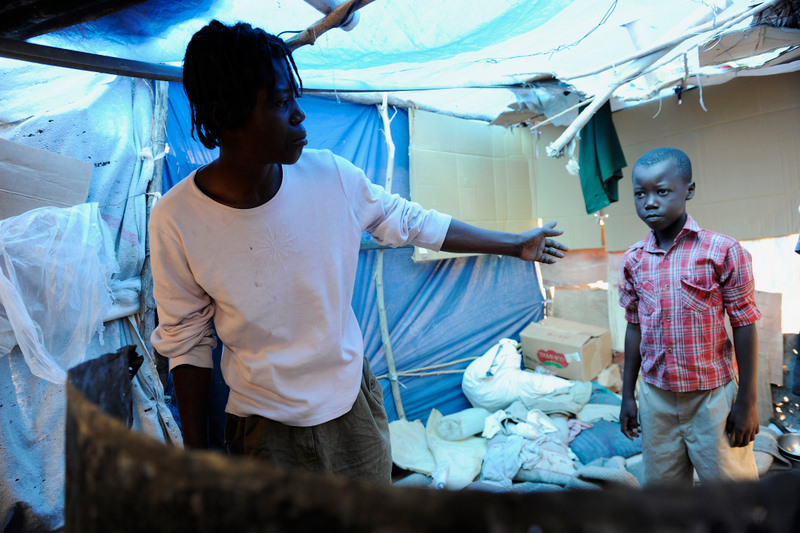 Marie Lucie Osias (L), lives with her son (R), the lone earthquake survivor among her four children, in a makeshift shelter. (Photo by Jonathan Ernst/LWR/ACT Alliance)

Shelter is still a major concern in Haiti; the United nations Office for the Coordination of Humanitarian Affairs (OCHA) has reported for the fifth consecutive week that shelter is one of the most urgent priorities facing displaced communities.  OCHA estimates that only 24 percent of the 1.3 million people in need of shelter have received tarps or tents.
ELCA Disaster Response is working to provide much needed shelter to people like Marie.  The Lutheran World Federation is hard at work to provide shelter materials like tarps and rope while transitional shelters are being constructed.  In the future, sturdier shelters will be needed as families prepare to cope with the annual hurricane season.  ELCA Disaster Response has also provided funds for the purchase and shipping of 12,000 tarps through Lutheran World Relief to be distributed in Haiti by Church World Service and the Lutheran World Federation.

Click here to read the full article on shelter needs from the ACT Alliance.