​On August 29, 2005, Hurricane Katrina slammed into the Gulf Coast of the United States. Damage and destruction sprawled from Florida’s panhandle to western Louisiana. 1,833 people died and many more were injured. With approximately 90,000-square miles of federally-declared disaster areas and one million homes and building destroyed, Hurricane Katrina is in the books as the most destructive and costliest disaster in U.S. history.

Lutherans around the world watched as news reports displayed images of the destruction and aired interviews with people who had lost so much due to the storm, and they turned to their church to respond. Immediately after Katrina hit, people started offering to volunteer in the affected areas and giving to Lutheran Disaster Response. More than $27 million was given to Lutheran Disaster Response to directly assist families that had been affected by Hurricane Katrina.

A major component of our Hurricane Katrina response was volunteer coordination. With an unprecedented number of people who wanted to volunteer, local congregations in the affected areas started serving as volunteer hosting centers or setting up volunteer camps that would end up running for years after Katrina hit as volunteers continued to pour in from around the country. One example is Christus Victor Lutheran Church in Ocean Springs, Miss., that started Camp Victor, a volunteer camp that housed 50,000 volunteers from all 50 states and 20 countries. In total, these volunteers provided 1 million service hours as they helped to gut, repair and rebuild more than 2,000 homes.

In addition, “What a Relief!” formed as an alternative Spring Break volunteer program with Lutheran Disaster Response. During the program’s first year, more than 800 college and university students from 34 U.S schools participated in Spring Break service projects in the areas affected by Hurricane Katrina. For the next four years, Lutheran Disaster Response continued to coordinate more than 50,000 volunteers through “What a Relief!” as it expanded beyond the alternative Spring Break program. 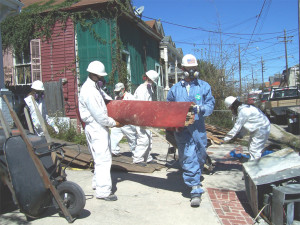 Students from Valparaiso University help clean out a house damaged by Hurricane Katrina as part of the What a Relief! alternative spring break program.

Throughout the Hurricane Katrina response, special attention was paid to providing emotional and spiritual care for those who were affected by Katrina.