This piece is part of the Washington, D.C. installment of the “Advocating on the Road” blog series.

By the time the Centers for Disease Control first used the acronym AIDS (Acquired Immune Deficiency Syndrome) in the fall of 1982, the disease was already heavily stigmatized in the United States. Reports of the disease were mounting weekly, and the public was becoming increasingly aware of the linkage to gay men and intravenous drug users — groups that were already stigmatized. While the medical community searched for definitive evidence on what caused the disease and how it was transmitted (and elected officials, including President Reagan, remained silent in the face of a growing epidemic), many Americans responded to the disease with fear and judgment.

It was during this uncertainty that Karin Klingman — a member of Christ Lutheran, an ELCA congregation in Washington, D.C.—was beginning her medical career as a resident physician. Now an infectious disease doctor and involved in clinical research at the National Institutes of Health, Karin felt compelled to work with HIV and AIDS patients in the early 1980s when “nobody wanted to touch them and yet somebody needed to be caring for them.” She says, “I’ve always had a great deal of compassion for these patients — they were always a marginalized group: the gay men whose families didn’t come to visit them; the IV drug users whose lives were a mess; and other people who were shocked to be dealing with the life-threatening disease they didn’t expect to get.” Since then, Karin has devoted her career to working with HIV and AIDS patients and, since coming to the National Institutes of Health, being involved in research that focuses on treatments for HIV-infected people.

Outside of work, Karin engages members of her congregation and other Lutherans and Christians in D.C. to tackle stigmatization and serve those living with the disease. “The D.C. area has a special need to focus on HIV and AIDS and try to get the prevalence rate down,” she says. “We can do a lot as a church to welcome marginalized people, make them feel whole.”

Most recently Karin has been a leader within Lutheran Grace, a group of Lutherans in the D.C. region who are committed to reducing the stigma of HIV and AIDS, as they participate in the 2012 International AIDS Conference currently taking place in Washington, D.C. They are a strong Lutheran presence at the Global Village, and the only church denomination with a booth in this diverse space where people from all over the world meet, share and learn from one another. Through the ELCA Metropolitan Washington, D.C., Synod, Lutheran Grace has recruited volunteers and church members from all over the synod and other regions to create prayer cards for their booth in the Global Village. “It’s been phenomenal the way people have embraced this. We never expected this response, and I couldn’t have expected more than what they’ve done,” Karin says.

When asked what she has learned about working with HIV and AIDS professionally and within her congregation, Karin responds, “I’ve seen that people don’t realize they should worry about HIV unless they’ve been personally affected. Once you start talking about it, they start to understand stigma and how that makes living with the disease so much worse. I think the church should commit itself to being inclusive and welcoming to people with HIV and AIDS and not judge what they’ve done or why they’ve gotten the disease.

“Unless we’re compassionate about the disease, it’s never going to go away — people won’t be tested and people won’t take drugs because they’re scared of being identified. We won’t be able to combat the disease. We have to keep talking about it; people in the church are receptive to learning. I think the church is a good place to talk about it — we are supposed to welcome all people.”

Keep checking back for more updates on the “Advocating on the Road” series.  Look for more blogs on HIV and AIDS in Washington, D.C. and beyond in the coming days. 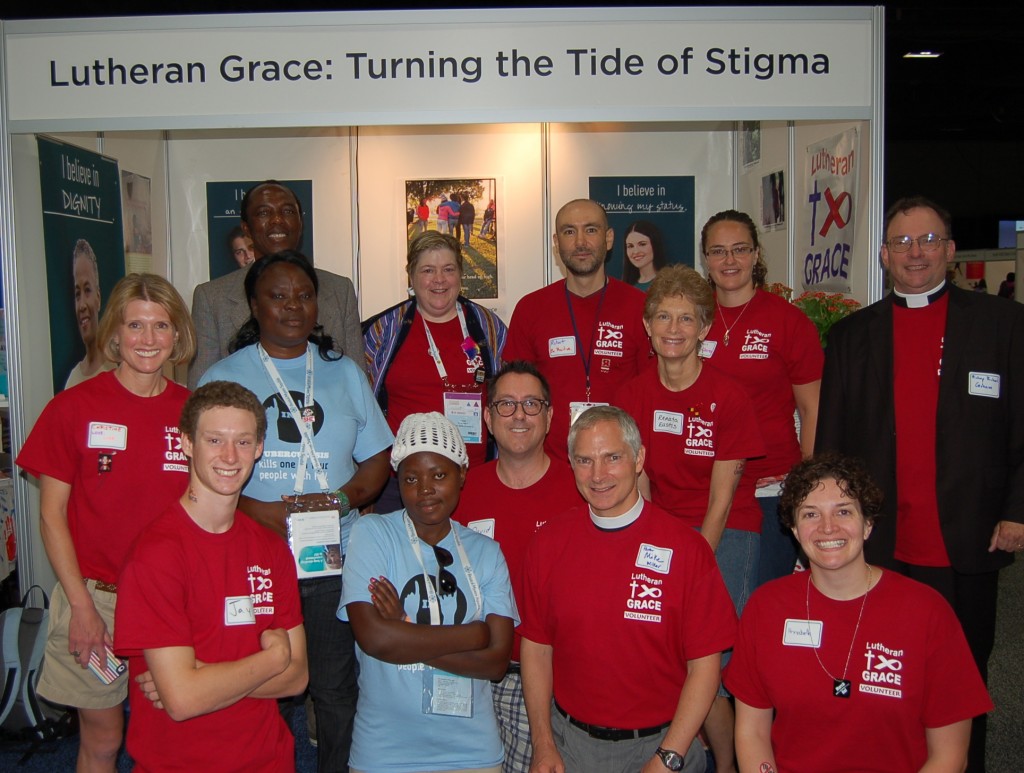 The Bishop of Metro D.C. Synod, Rev. Richard Graham and Lutheran World Federation delegates to the International AIDS Conference join Karin and other volunteers with Lutheran Grace at their booth in the Global Village.

HIV and AIDS in Washington, D.C. | “HIV — you’re either infected or affected.”