Ruth Ivory-Moore, Program Director Environment and Energy, traveled to COP22  in Marrakech, Morocco in November as world leaders meet to discuss implementation of the Paris Agreement that went into effect on November 4, 2016.  The first week she is supporting ACT Alliance  of which ELCA is a member by  participating in Side Events that allow for everyone to be directly engaged in discussions addressing the diverse issues surrounding climate change.  The second week she is serving as part of an ACT Alliance delegation as an observer. Below are some reflections and photos of her first week of experiences at this amazing conference where people project to be on one accord to protect and steward all of creation.

This proverb is particularly instructive in describing the events at COP22.   There is a strong sense of diversity and inclusiveness.   Senior level governmental officials negotiate Paris Agreement implementation provisions; civil society observes and seeks to influence; and those most likely to be impacted now and in the future, sought to be heard.   The latter included indigenous people and our children.  These voices were heard in various ways during this session of COP22. 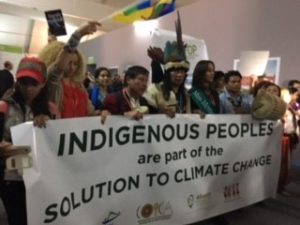 The indigenous people have contributed least to climate change, but are significantly impacted.  They need the rest of the world’s assistance, but those providing the help must first understand their community dynamics. Those offering assistance must do so in an accompaniment manner.  We must walk and stand with them in partnership – bridging gaps, while laying the foundation for sustainability and resilience. A diverse group of people including the indigenous staged a march to express the need to hear their voices; and to recognize that they must be included in the conversations. (See picture left)

While the indigenous people are likely to be impacted as part of the world’s vulnerable population today, we should not forget that we must leave a vibrant, clean world for our children.

The COP presented opportunities for some amazing young people to show the world that they have voices, and deserve better than what we are on course to leave them today. Whether it was the young girl from Senegal speaking about biodiversity. (See picture left)

The students quizzing a panel of experts with questions that challenged the brightest. (See picture left)

Or those students capturing the moments as camera and production personnel for the hour and half, each presented themselves not only professionally, but passionately and

This COP22 cleverly demonstrated the importance of all and the need for complete inclusiveness.  This all-inclusiveness extends to religion.

Sessions incorporated diverse religious personnel.  An Islamic cleric spoke of the importance of ecology, emphasizing that the Islam mandates that people must protect all. The universe is to show gratitude to God, who is beauty. God loves beauty, not war. A Buddhist leader spoke of how all life is interdependent and that we were born on this earth not to be part of the destruction. COP demonstrates that caring for

creation is a stewardship requirement that is shared by the faith-based community in general.

We are commanded by God; and have a duty to our children.

Prayer: Oh God of Heaven and Earth, you desire a reconciliation of the whole creation.  We confess that we too often make choices that separate and destroy.  Forgive us our selfish ways.  Help us to seek justice, oh God, and to walk humbly beside you as we seek life that is centered on you and as we protect your creation.  Help and guide us to joyfully seek your wisdom and guidance.  Amen.

It is unfortunate that being “one in Christ” is not recognized  universally in the world as we live our lives today.   The Asian-Pacific Resource and Research Centre for Women (ARROW) a Malaysian based organization sponsored an interactive discussion session at COP22 entitled “Paris Agreement and Women – Locating Health in Climate Change Discourse”.    The reality is that women are disparately impacted by the effects of climate change.  The time has come to acknowledge and integrate the gender rights issue into the discussions addressing climate change.

The Paris Agreement in the preamble states:  “ Acknowledging that climate change is a common concern of humankind, Parties should, when taking action to address climate change, respect, promote and consider their respective obligations on human rights, the right to health, the rights of indigenous peoples local communities, migrants, children, persons with disabilities and people in vulnerable situations and the right to development, as well as gender equality, empowerment of women and intergenerational equity…”   At the COP22 where the representatives from the many nations are beginning to hammer out the implementation rules and guidelines of the Paris Agreement, the hope is that key linkages between women’s health and climate change will be considered and incorporated in the implementation discussions. 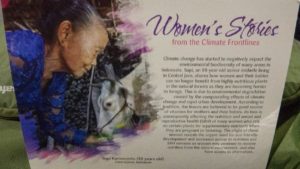 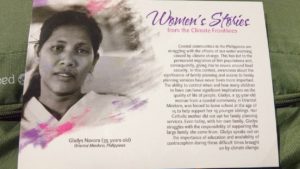 These women’s stories are unfortunately not atypical particularly in developing countries.  ARROW representatives gave the example of  Bangladesh which is a densely populated country with a poverty level that is very high. Bangladesh is experiencing more severe weather in the form of increased frequency of floods and cyclones where women are impacted the most.   The women do not want to leave their homes for fear of property losses, but are often forced to leave and migrate internally walking through high flood waters that results in gynecological illnesses that can impact the reproductive system.  These women can also be the targets  of sexual violence.  Living through situations such as these can cause depression which impacts mental health.

This ARROW presentation at COP22 was unique in that the end of the session was all about hearing what the audience had to say.  The session facilitators engaged the audience in a robust conversation.  Questions raised included: (1) How will women’s health issues be incorporated in the Paris Agreement implementation; and (2) What can be done to make this happen?  The consensus of the group was  that the time has come where gender issues needed to be integrated into the talks and be given the same weight/status as other issues.

Women in a marginalized society, are the most vulnerable among us.

Caring for Shishmaref and all of God’s creation

“Climate change is the biggest challenge that we face. Because of climate change we are forced to relocate within three decades,” Esau Sinnok said during a recent phone interview about Shishmaref. Esau was born and raised in this village in Alaska. He has recently become an outspoken advocate for Shishmaref and environmental conservation.

The island village has recently gained national attention for its historic decision to relocate. On Aug. 16, by a narrow majority of 11 votes, the village decided to move to the mainland.

Shishmaref residents were driven to this decision because of the unique and challenging circumstances of its environment. Located north of the Bering Strait, the Inupiat island community has struggled for decades with receding shorelines. Rising temperatures have reduced the sea ice, which has historically protected Shishmaref from storm surges.  “The ice has started to melt a lot earlier [each] year,” Sinnok said.

Climate change has led to increased flooding and erosion. In addition, the permafrost, on which the island stands, is slowly melting. As a result, Shishmaref is one of the most dramatic examples of a population effected by climate change. Shishmaref is  “two good storms away from being underwater,” said one resident.

Thomas Richter, a Lutheran pastor, shepherds the only congregation in town, which on a typical Sunday morning sees around 50 people in worship. The relocation vote has left the village “a community divided,” he said. Many residents feel that the outside world has abandoned them.

So what are the options available to Shishmaref? Old Pond and West Tin Creek Hills are two potential sites on the mainland that could house the village. But relocating would be an expensive endeavor, costing an estimated $180 million. And just relocating would not immediately solve all the problems. Amenities and infrastructure would take time to develop, and the suggested site doesn’t have barge access, a critical flaw for a population that is isolated from traditional transportation.

The residents are also concerned that relocating risks diluting or losing aspects of the community’s unique culture. Pastor Richter said of the challenges facing the community, “The biggest challenge is preserving the culture.” The traditional language has slowly been lost as more residents interact with other parts of Alaska and the world. Shishmaref is also a renowned hub for art. The carvings of bone and walrus ivory are sought throughout the United States. Moving to new locations may frustrate this carving industry as the resources become more difficult to acquire.

Not all are against relocating. Sinnok thinks the relocated community could be preserved. While the current location holds many dear memories, he emphasized how grateful he is for the chance “to move as a community so that [we] can still be called Shishmaref. And our 4,000-year culture can stay alive.”

While support for Shishmaref has been shown by some church groups, more support from other people and groups will be needed for relocation. Pastor Richter said that support from the lower-48 states is paramount to helping Alaska transplant Shishmaref. Thinking more broadly, Sinnok emphasized the importance of everyone recognizing their impact on the environment and trying to reduce it. He encouraged people everywhere to raise awareness of the effects of climate change with their peers and to be more social in the outdoors. Being outdoors reduces the energy resources used and improves sustainability.

The Rev. Shelley Wickstrom, bishop of the ELCA Alaska Synod, said the synod will accompany the community through prayer and support as it relocates. In particular, she mentioned the need for a new church and parsonage when the community relocates.

Everyone who was interviewed emphasized the importance of raising awareness of Shishmaref. As people of faith we are called by our social statements to recognize that “care for the earth [is] a profoundly spiritual matter.”[1] In raising awareness of Shishmaref, we are both fulfilling our duty to love our neighbors and committing to care for all creation. This commitment to creation involves us as individuals, congregations, advocates and members of a larger community.

One way to raise awareness is by writing to lawmakers about the importance of supporting legislation that helps communities affected by climate change. ELCA Advocacy has an easy-to-use toolkit for writing your members of Congress. Please consider advocating for Shishmaref and other communities like it. By encouraging policies that reduce greenhouse gas emissions, encourage using renewable energy resources and promote energy efficiency in all sectors of society, we send a message that Congress needs to act. In addition, if you or a community you know faces challenges associated with climate change, please contact us at washingtonoffice@elca.org. Finally, we can advocate for Shishmaref through prayer. We may face despair, but we remember that as people of faith we are called to be hopeful while committing to doing God’s work through our hands.

Pastor Richter’s parting remarks carry a call to action and an affirmation of the interconnectivity of all of God’s creation: “Our battle is not unique nor is it something that only applies to those in far off, hard to reach places. The sinking sands of Shishmaref are the same sinking sands of the rest of the world. This is our planet that is melting because of us. If the people of Shishmaref become climate refugees, we are all climate refugees.”

May we heed his words and work for God’s justice throughout creation.