ELCA Blogs / ELCA Advocacy / The people we meet along the way

The people we meet along the way 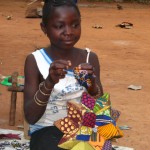 A young IDP whose family fled violence along the Sudan-DRC border. She is working on a handicraft project to help support her family in its new home. Photo Credit: Krista Zimmerman

Travel is something I enjoy.  So when my work for Lutheran World Relief took me to Sudan, I was grateful for the opportunity.

Although some aspects of the trip were uncomfortable and stressful, I was always aware that I journeyed far from home by choice – and that the same could not be said for many of the people I met along the way.

I traveled to a remote corner of Sudan, near its borders with the Democratic Republic of Congo and the Central African Republic, by road.  My guide was a local Catholic priest.

Reports of armed conflict in the area initially delayed our departure as the priests contacted sources on the ground to ensure the situation was stable. When we finally left, we were relieved to be on our way, but also a bit nervous about the situation into which we were traveling.

Several hours into the trip we started to see empty villages and abandoned fields. The few people we encountered traveled in groups and were armed with spears or hand made knives.

On the road we stopped and talked with women carrying bundles of food on their heads.  They told us they fled their village the night before to resettle on the outskirts of an army encampment several miles away.  They had returned to their homes to procure food and were anxious to return to camp before dusk.  They planned to spend their nights close to soldiers while they waited to hear if there would be more violence. 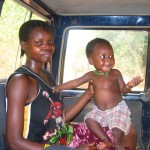 A mother and her son who were uprooted from their home in southern Sudan as a result of LRA violence. They were traveling to the town of Yambio to seek shelter there. Photo Credit: Krista Zimmerman

We also encountered a young mother and her baby boy, Richard. They aimed to get to town before nightfall, where they hoped things would be safer.

Our travel companions fled as a result of attacks attributed to the Lord’s Resistance Army – an armed force, originally from Uganda, that has plagued East Africa for years.  But they are not the only displaced persons in or from Sudan.

Lutherans provide support to a refugee camp in Kenya that houses about 18,000 refugees from Sudan. Many hail from south Sudan states where thousands died as a result of tribal clashes last year.  Needless to say, the death toll deters them from returning home.

Southern Sudan is supposedly at peace but the UN is making plans for up to 40,000 new refugees from the area.  Continued insecurity, unchecked poverty and a volatile political climate continue to force or keep many Sudanese from their homes.

For these reasons, and many others, Lutherans are actively working to encourage U.S. support for peace and continued development in southern Sudan – and are being successful in their efforts.

Last year, the U.S. Senate unanimously passed a resolution (S. Res. 404) calling on the United States Government to increase its efforts to assist the Government of South Sudan and to fully implement the Comprehensive Peace Agreement signed in 2005.  It also encouraged the President and other international leaders to strategize and develop contingency plans for all eventualities – and to focus on long term development in the region.