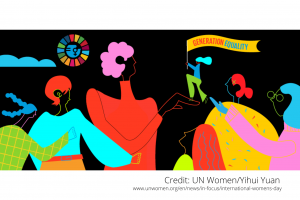 International Women’s Day (IWD) notes celebrations and challenges of women in the United States and around the globe. Observed March 8, IWD is a global day celebrating the social, economic, cultural and political achievements of women, and also marks a call to action for accelerating women’s equality. The ELCA social statement, Faith, Sexism, and Justice: A Call to Action, says: “The ELCA is grateful for the faithful and courageous witness of our global communion, the Lutheran World Federation (LWF). While this ELCA social statement is situated in the diverse cultural context of the United States, we recognize the biblical rationale, principles, and methodology of the LWF ‘Gender Justice Policy’ as a global benchmark toward conversation and common practice. In a spirit of ‘mutual conversation and consolation,’ the ELCA will continue to accompany and to be accompanied in implementing that policy within the global Lutheran community.”

By guest blogger Rev. Dr. Marta Ferjová,* pastor in the Evangelical Church of the Augsburg Confession in the Slovak Republic

Since childhood my female friend grew up in the Church. She experienced many beautiful things within the community she went to: trips, camps, skiing, social evenings.

Once she was approached by a churchwoman and told that they needed someone to read the Scripture during a worship service. So my friend offered to come and do it in her free time. However, when she arrived at the church on the day she was supposed to do the reading, that same woman was waiting at the entrance and told her: “I’m sorry, but you can’t read today. The priest who serves today’s service will not stand women at the altar. He said that you can come to the church, even volunteer, but reading the Scripture in front of the people is reserved for men only.“

As an adult, this friend of mine left the church. Still, in the society, in her work and in her daily life, she experiences things similar to this scene until this day.

It is the year 1951, and the Evangelical Church of The Augsburg Confession in Slovakia (ECAV), in the region where I now serve as a Lutheran World Federation coordinator for Women in Church and Society, becomes one of the first churches in the world where a woman is allowed to serve as a priest. Since then, women in my church have the same rights as men to be elected to all positions and functions within the church. They may even be elected as bishops, although this has never happened before. The ECAV has more than 160 women in active service, which is almost 50 percent of all clergy working within our church.

Women are considered to be great in many positions, but according to the opinion of the majority, they have not yet “grown” to be leaders. We can see the similarity of this thinking in other spheres of the society, too. The representation of women has been more or less balanced in all areas of social life. In some departments, the number of women even surpasses the number of men. But getting to a hierarchically higher position is literally impossible for women.

For most people, the gender stereotypes, patterns, prejudices, myths and dogmas don’t seem concerning . They intensely surround us from an early age, and we cannot avoid them. When a person since childhood keeps hearing that women have to take care of children and housework, that the role of a woman is to be a mother, that being a woman and having a successful career at the same time is unimaginable, it all affects them. 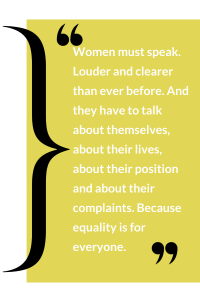 It takes years to remove the layers and layers of opinions that a person absorbs into their subconsciousness. The consequences of medieval thinking still influence the perception of women and still ascribe behavioral patterns for women, including those who are members of the church. Although the church and culture may officially rate women highly positively, nevertheless approaches may still be patriarchal and convey that women are “the weaker sex.”

Yet, the role of the Church is to humanize the world and the society. It is supposed to help to make the world better and give it back the seal of God – the Creator.

Therefore, is it absurd when the church still retains the image of a woman which comes from the socio-cultural stereotypes of antiquity or the Middle Ages. Exegesis of many biblical texts takes into consideration the historical, social, cultural and religious context of the time, but it is ridiculous when that principle is forgotten when it comes to biblical texts which speak of the subordination of women in the society.

Although today’s church outwardly proclaims equal opportunities, freedom and tolerance, it does not ultimately practice it. In the Central European churches, voices on the image of a woman of orthodox bishops and believers who are often also engaged in the conservative politics can be heard. Although the Protestant Churches in our region democratically elect their bishops, they have not yet been able to transcend their own shadow and elect a woman to this position. Real debate about the equal status of women and men within the church, and about divorces, abortions or homosexuality, has not even begun.