Pathway to equality with justice in Universal Declaration of Human Rights

A fundamental document turns 70 years of age on Dec. 10, 2018. Translated into 500 languages, its 30 articles guarantee and affirm rights, freedom, inherent dignity and equality of all humankind. Its principles represent tools that have allowed individuals to claim their dignity and provided them an avenue to fight for their rights. 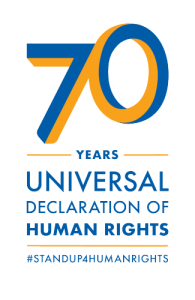 Created in the aftermath of World War II in 1945, the United Nations (UN) was chartered to build a space for multilateralism with the aim of never returning to the scourge of global conflict and work to advance human rights. Following the UN Charter, another foundational text was created: the UDHR. Adopted by the UN General Assembly in 1948, the monumental document states that “all human beings are born free and equal in dignity and rights” (UDHR Article 1). These rights are to be respected and enjoyed by all.

The UDHR is not a stand-alone agreement. It is further substantiated with the generation of a normative framework known as “international human rights law,” which has offered a legal guidepost for countries and international organizations to universalize rules and principles of conduct that allow states to engage with their citizens and each other.

Elaborating on this framework, the UN has created demographic-specific human rights instruments which build on and reinforce each other to ensure that all people are represented and protected. For example, the International Covenant on Civil and Political Rights and the International Covenant on Economic, Social and Cultural Rights, both adopted in 1966, affirm individual and state freedoms, especially freedom from violence and torture, and offer equal protection under international law.

These documents are also aspirational, identifying and stating an adequate standard of living for all humankind. These agreements include commitments by states to provide adequate basic needs like food, shelter and clothing by calling them “fundamental rights.”

The Rev. Dr. Frederick Nolde, a Lutheran, contributed to article 18 of the UDHR. Article 18 pertains to the “Right to freedom of thought and religion,” indicating that “Everyone has the right to freedom of thought, conscience and religion; this right includes freedom to change his religion or belief, and freedom, either alone or in community with others and in public or private, to manifest this religion or belief in teaching, practice, worship and observance.”

We have seen firsthand how the UDHR has served as a beacon of hope for the vulnerable and marginalized – allowing them to emerge from the shadows with confidence and in the protection of the international community. This resonates with our call to “act justly, love mercy, and walk humbly with God” (Micah 6:8).

Dec. 10 also marks the last day of the 16 Days of Activism against Gender-Based Violence, a campaign driven by civil society to accelerate action to end violence against women and girls. Structures of inequality are mostly unchanged, and the relationship between men and women remains unequal. There has been failure to address and challenge broader dynamics of patriarchy and inequality among men and women that result in lack of economic and social rights for women and girls. It is time to “Walk our Talk,” the theme of Lutheran World Federation over the 16 days and beyond.

Millions of people are still suffering from poverty, hunger, conflicts, war, gender inequality and unjust systems that leave UDHR promises unfulfilled. We are witnessing a breakdown of international multilateralism, shrinking space for civil society engagement, violations of fundamental human rights with impunity, xenophobia, homophobia, racism, ongoing patriarch and gender-based violence, just to name a few. The aspiration of the UDHR is, therefore, more relevant now than ever. We celebrate how far we have come, yet we must simultaneously examine how little has changed in these 70 years.

Despite it all, as people of faith we remain hopeful. Together we have the power to #standup4humanrights, make a difference for stronger respect, greater freedom and more compassion, and overcome the challenges identified by the UDHR.

Take the Human Rights Pledge organized by the UN and stand in solidarity with victims and survivors of human rights violations. Show love, compassion and empathy to your neighbor. Speak out against violence facing women and girls. Engage your local and national level officials, holding them accountable to international law and principles, and ensuring that they espouse values of respect, dignity and equality.

The next 70 years can take us on a pathway to the realization of the inspiring UDHR message of equality and justice. As the Rev. Dr. Martin Luther King, Jr said, “Injustice anywhere is a threat to justice everywhere.”

December Advocacy Update | The federal budget and migration: An update