Last week, close to 140 Lutherans gathered in Harrisburg for LAMPa’s (Lutheran Advocacy Ministry in PA) annual Lutheran Day at the Capitol.  Torrential rain could not stop our advocates from gathering together to learn about issues facing Pennsylvania’s most vulnerable.

Why didn’t the rain stop them?  Why did so many travel so far?

One advocate said, “Lutheran Day reminded me that I am not alone in my advocacy efforts on behalf of the poor and hungry”… together  1 + 1 + 1 can make a powerful difference.

Rev. David Beckmann, President of Bread for the World, was our keynote speaker and perhaps the biggest reason our advocates braved the storms. Several in attendance were amazed by his reminder that we have made progress on hunger in the past (in the U.S.) and that we are making progress RIGHT NOW all across the world.

Matt, a resident of Lancaster, said, “I was struck by Beckmann’s comment that Americans have trouble seeing the dramatic progress.”  For many, Lutheran Day is about the opening of eyes:  to see the good, and to see the bad — but to see the bad together, and all the love and hope in the room that wishes it were not so, and believes in a God with transformative powers. 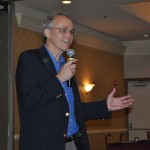 This year’s keynote also reminded our advocates of the power in story telling.  Beckmann shared two stories, one of which I will tell again here.  Helpfully, Beckmann was open and honest about the feedback he gets from people who don’t believe in the power of faith-based advocacy. “I just don’t know who I’m really helping,” some say.  “You’re helping people like my son,” Beckmann said as he transitioned into his story.  The birthmother of Beckmann’s adopted son was on WIC (Supplemental Nutrition for Women, Infants, & Children) when she was pregnant.

Stories such as this carry significant weight with lawmakers.  As faith-based advocates, one of our primary responsibilities is to help our elected officials see the faces behind the numbers on their spreadsheets; to help remind them who will really be affected by the policies they propose.

The value of coming together from many different places for a day like Lutheran Day may seem hard to measure, but it always shines through our evaluations.  This year was no exception:

“Through networking, there seemed to be a proactive attitude emerging and a belief that we have an opportunity to be one strong voice in advocacy”.  Amen.