Lenten Advocacy Reflection: My God vs. your God

For there is no distinction between Jew and Greek; the same Lord is Lord of all and is generous to all who call on him. For, “Everyone who calls on the name of the Lord shall be saved.” – Romans 10:12-13

Jerusalem, Jerusalem, the city that kills the prophets and stones those that are sent to it! How often have I desired to gather your children together as a hen gathers her brood under her wings, and you were not willing! – Luke 13:34 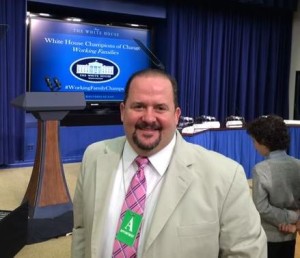 Last Sunday we heard Paul’s letter to the Romans proclaiming that there is “no Jew and Greek … under one Lord of all” and the story of the temptation of Christ in the wilderness. And this Sunday Paul invites his readers to remember that “our citizenship is in heaven” while Luke’s Gospel is the lament over Jerusalem. When I tune into the latest news about this year’s elections, I can’t help but think about the timing of this Lent’s readings and wonder, is God trying to tell us something?

What if we as Christians didn’t fall into the temptation to believe that my God is not your God? I wonder what would happen if we tried to change the conversation by rewriting the Scripture from Romans this way: For there is no distinction between Democrat and Republican; the same Lord is Lord of all and is generous to all who call on him. What if candidates began their stump speeches with recognition of the humanity and dignity of their opponent(s) and then began pitching their ideas for the future of our country?

Ok … I know. This isn’t the way we do politics, and I don’t want to be Pollyannaish, but when the rancor gets as bad as it is, I think we are called as a church to speak up. More importantly, we are called to model the notion that we are all the children of one God; that God loves us each individually and has given us each gifts and skills to be in the world. Could we simply agree on this and model it in the world in the way we each exist in the world and to everyone around us?

I had an opportunity to visit the ELCA Southeastern Synod recently for an advocacy event in Atlanta titled: “Your Voice Makes a Difference.” What struck me about this meeting is the work they had done to form an advocacy network in their synod. Rather than concentrating on what divides us, they are seeking to give voice to issues they have found agreement on. In deciding their priority advocacy issues, the leaders asked, “Where do we agree?” This is what they came up with:

~ No one should go hungry.

~ No one should be a victim of slavery.

~ We incarcerate entirely too many people.

~ Our current immigration system is broken.

~ All people are of equal value.

I bet if we tried, we could add to that list in some simple and meaningful ways. But these six powerful concepts for that growing network brought unity that is turning into advocacy that will turn into meaningful change.

One of the reasons Lutherans make such an impact on public policy, especially policies that affect our communities, is that we have found a common call to God through Jesus Christ. Our agreement on that makes possible more than we could ever imagine in a divided, broken, rancor-filled world.