The House of Representatives and Senate have returned from the July 4th Recess, and 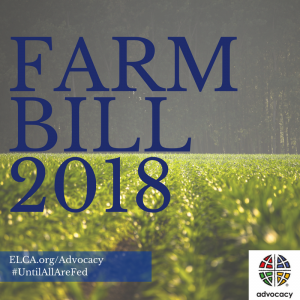 ELCA Advocacy and the Advocacy network look forward to their next movements to complete the 2018 Farm Bill. The 2018 Farm Bill funds the food system, ensuring farmers get access to the support and resources needed to produce food in sustainable ways, and guaranteeing hungry people domestically and internationally are supported through the various food programs that the bill funds.

In April the House of Representatives released their version of the Farm Bill, the Agriculture and Nutrition Act (HR.2), which provided strong supports for farmers and international food assistance programs. HR.2 failed to pass the first time it was voted on and passed by only two votes the second time. Hunger Advocates have expressed concern for how HR.2 would impact the Supplemental Nutrition Assistance Program (SNAP, formerly known as Food Stamps). The proposed reforms would create additional work requirements, shift funding from the programs into the creation of short-term job trainings and would ultimately negatively impact millions of low-income seniors, people with disabilities, veterans, unemployed adults and families with children who rely on the program. Learn more about the Agriculture and Nutrition Act here.

The Senate, through the bipartisan leadership of Chairman Roberts and Rankin 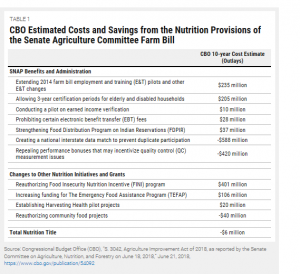 g Member Stabenow, were able to draft and pass the Agriculture and Improvement Act (S. 3042) with 85 senators voting in favor. This is the highest vote count of approval in Farm Bill history and an excellent example of bipartisanship. The Agriculture and Improvement Act was lauded for its continued support of farmers, generous funding for international food assistance and protection of structure and funding for SNAP. Learn more about the Senate Farm Bill through the Food Research and Action Center.

Senators and Representatives from both parties will need to come together to pass a final  2018 Farm Bill that establishes a strong foundation for our food systems. House and Senate leaders will appoint Conferees to serve on a conference committee tasked with negotiating a Farm Bill that can be passed by both chambers.There is hard work ahead for the Conferees as they work towards navigating major differences in SNAP funding and structure, issues around conservation, and the upcoming midterm elections which could impose serious time limits on getting a bill through both chambers. The ELCA network will be mobilized to take action on contacting Conferees for a Farm Bill that reflects the needs of all of our communities. Lutherans have a powerful faith voice to share as we continue to urge legislators to support both the needs of farmers and families who rely on nutrition assistance.