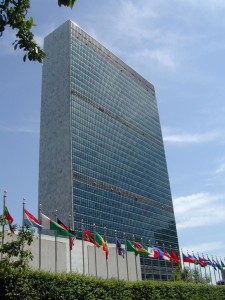 As the staff at the Lutheran Office for World Community prepares for the arrival of presidents, prime ministers and other heads of state from around the world to speak at the 67th regular session of the United Nations General Assembly now underway, we think it’s important to let people know more about what issues will be taken up at the United Nations this year. To be sure, our world community faces many challenges, with the ongoing global economic crisis, continued violence and unrest related to the “Arab Spring,” and the daily lack of security for many people in some sub-Saharan African countries being only some of the most notable. However, in the face of such daunting problems stands the United Nations, working to foster peace, support sustainable development, and protect human rights on a global level.

While addressing the concerns of member states and observers in the General Assembly, a number of high-level meetings focusing on a variety of issues will be convened over the course of the next few months. The first two of these meetings will discuss how to strengthen the rule of law on both national and international levels and the other will take up efforts toward promoting sustainable energy for all of humanity. Other upcoming high-level meetings will deal with topics such as the Global Initiative on Education, granting greater global access to proper nutrition, countering nuclear terrorism and combating the spread of chemical weapons.

Another pressing issue at the United Nations, which will be apriority for this office over the next few years, is the upcoming deadline for reaching the Millennium Development Goals in 2015. Back in 2000, world leaders came together to set quantifiable goals for global development in eight areas; some have described the Millennium Development Goals as the world’s greatest promise. The ELCA both at home and through its international partners is working to help reach these goals through sustainable development, direct relief, education, and advocacy efforts. The good news is that according to United Nations’2012 Annual Report on the Millennium Development Goals, three targets for reducing extreme poverty, improving clean water access and helping people move out of urban slums, have already been met. There has been a great deal of progress in other areas as well, such as combating HIV and AIDS and working toward gender equality in access to primary education, but much remains to be done. For instance, there has been little success in areas such as reducing the maternal mortality rate. As the world inches closer to 2015, the United Nations is working to analyze successes and failures of the Millennium Development Goals program overall, and most importantly, beginning to discern what’s next after 2015. This past July, UN Secretary-General Ban Ki-Moon appointed members of a high-level panel to offer advice on the post-2015 development agenda. Work on this process is now ongoing throughout the United Nations system.

So there you have it: a basic overview of issues facing the United Nations this year. The Lutheran Office for World Community will continue to follow these and other issues in order to engage the voices and actions of Lutherans in their ministries worldwide. Thanks so much!

Food and Community: a spiritual reflection | Common ground in the frozen tundra