From Lima, Peru: The faith community stands ready for a real commitment to addressing climate change 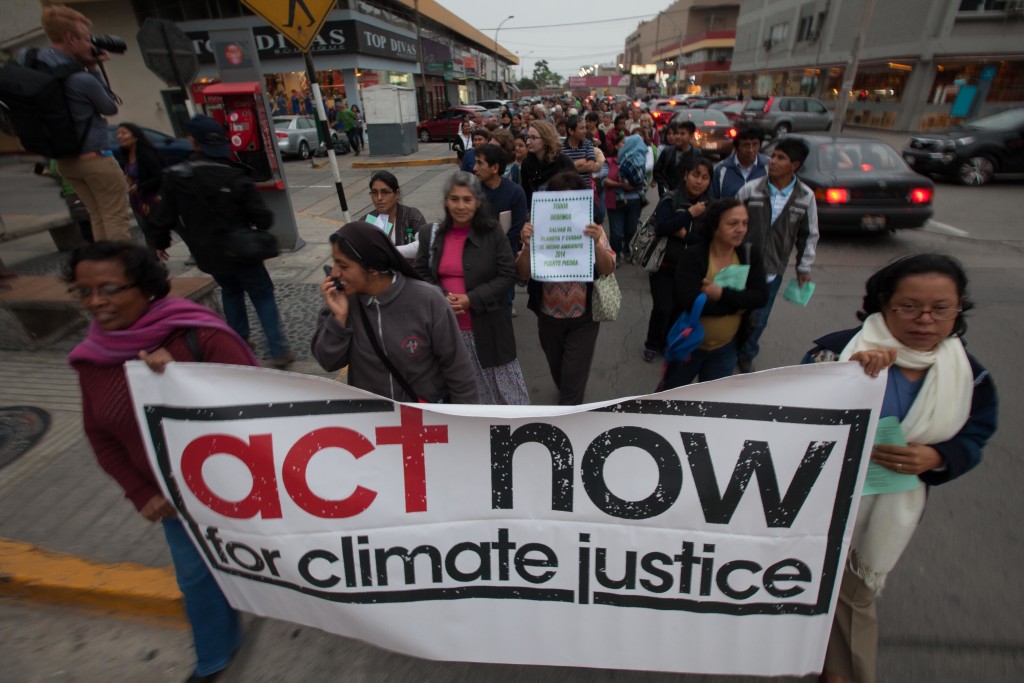 On the eve of the first day of COP20, the UN climate talks in Lima, a Vigil for the Climate was held near the Pentagonito where the UN talks are to be held. Christiana Figueres, the head of the UNFCCC and Manuel Pulgar-Vidal the Peruvian Minister for the Environment and President of the UN meeting, spoke to the crowd and a symbolic lighting of candles began the celebration that marks the end of one year of monthly fasting by religious and environmental groups around the world in the Fast for the Climate.

In December 2015, the UN Framework Convention on Climate Change (UNFCCC) will meet in Paris to discuss and launch a new international climate agreement. Last week and this week, leaders from around the world gather in Lima, Peru for the last high-level round of negotiations before Paris discussions. Representatives from faith traditions around the world, environmental groups, youth, business representatives, and labor unions are also present in Lima and are working together to ensure that the framework for the new agreement reflects their priorities.

I write today from Lima, where I am representing the Evangelical Lutheran Church in America (ELCA) as part of a delegation from the ACT Alliance– a faith-based global relief and development network. The increasing involvement of people of faith in the UNFCCC meetings each December, as well as the massive presence of people of all faiths at the People’s Climate March in New York this past September, reflects our common concern about the future of the world that we believe God created and calls us to tend. This shared sense of stewardship leads us to be concerned by the changes that all of us can observe, changes that scientists tell us are the result of human-caused climate change. Another common element shared by numerous faith traditions is concern for our neighbors, and particularly for the most vulnerable—children, the elderly, those who live in poverty. We see that climate impacts such as more severe storms, long term drought, flooding and sea level rise are falling hardest on these vulnerable populations.

This meeting in Lima is expected to end with parties agreeing to a basic framework for the new climate agreement which would take effect in 2020. Faith goals for the framework include a strong commitment from parties not only to reduce global greenhouse gas emissions but also to address the needs of vulnerable people who are already suffering the impacts of climate change in the new agreement. Building climate resilience for vulnerable communities, particularly in least developed nations, is a key point for the faith community. This will require that countries with means commit to financial and technical assistance for low carbon development, adaptation to climate change, and climate impacts that can’t be adapted to, such as sea level rise that leads to permanent loss of lands.

Indigenous participants sit in a plenary hall of COP20. The UN climate talks began on Dec 1st in Lima Peru, billed as the most important meeting in the history of the world, mechanisms for reducing climate change are being negotiated. The Fast for the Climate movement, with participation of environmental and faith-based groups such as the Lutheran World Federation, is reminding diplomats of the real dangers of climate change and urging them to take immediate action.

Before the end of the meeting in Lima, we expect that parties will announce a process for countries to come forward over the next year with their emissions reductions pledges for the new agreement. This action must come with a process to evaluate these pledges for adequacy and long term impact. Some countries have already announced the basic outlines of their pledges. The U.S. made an initial pledge of future action several weeks ago when President Obama announced the terms of a bilateral agreement with China. This agreement will reduce U.S. emissions 26 to 28 percent below 2005 levels by 2025, with China agreeing that its emissions would “peak” by 2030.

Finally, faith communities are looking for significant financial commitments from the U.S. and other developed countries, together with pledges from other parties with means, to fund both low carbon development and climate resilience, particularly in the least developed countries. The recent U.S. pledge of $3 billion over 4 years to the Green Climate Fund is a step in the right direction. Other countries are also slowly announcing their pledges and we hope for more to come.

At the end of the first week, many participants and observers expressed a sense of hope for the process, and a draft text released early Monday morning showed progress on some key points. Significant issues still are unresolved, but as people of faith we agree: this meeting in Lima must set us on the path to a strong, equitable and fair international agreement that will help us to avoid the worst impacts of climate change, for the sake of our children and future generations and for all of God’s creation.