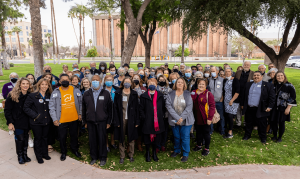 LAMA held its first Advocacy Day at the Legislature in more than 20 years on February 1, 2022. The day included remarks by House Speaker Russell “Rusty” Bowers; Representative Jennifer Longdon; Bishop Deborah Hutterer, ELCA Grand Canyon Synod; and Connie Phillips, CEO of Lutheran Social Services of the Southwest. More than 85 Lutherans and hunger coalition partners gathered to connect, pray, meet with legislators and hear the Invocation offered by Bishop Hutterer in the State House of Representatives. LAMA announced that hunger advocates including LAMA, Bread for the World, World Hunger Ecumenical Arizona Task-Force (WHEAT), Arizona Food Bank Network and Arizona Food Systems Network will collaborate on hunger advocacy legislation for the 2023 legislative session, opening the door to a new era of cooperation and commitment to ending food insecurity in Arizona. Special attention will be paid to food deserts and indigenous representation. More pictures of the day can be found here.

Meanwhile, as the window for new bill introductions for the 2022 session closes and we enter crossover week, LAMA is keeping eyes on bills related to its policy priorities of food insecurity and civic engagement, including more than 130 voting-related bills. LAMA championed HB2060 during Advocacy Day, a bill that would enable citizens with a drug felony on their record to access SNAP benefits more easily.

LAMA continues our efforts to educate our Arizona congregations about the importance of voicing our common needs in the public square. We are encouraged and grateful to the many congregations who invited us to participate in worship and share our advocacy message.

DAY AT THE CAPITOL: Lutheran Advocacy Ministry Colorado hosted Lutheran Day at the Capitol on Thursday, February 17, 2022. All faithful advocates in Colorado were invited to this day of learning and action! More information is available at https://www.rmselca.org/co-lutheran-day-at-the-capitol.

LEGISLATING IS UNDERWAY: The Colorado General Assembly is in session, and there are already several bills on the docket that Lutheran Advocacy plans to work on. These include:

More bills are in the pipeline, including reforms to Colorado Works and allocations for housing and support services from federal COVID relief funds.

DISASTER RESPONSE: The Rocky Mountain Synod is actively accompanying people who lost their homes in the historically destructive Marshall Fire in Boulder County on December 30, 2021. Together with Lutheran Disaster Response and Lutheran Family Services, we are working to address the needs of displaced families and people, beginning with those who are part of our congregational communities in the area. Learn more at https://www.rmselca.org/boulder-county-fire-response.

Budget Surplus: In mid-January, a new budget forecast surprised everyone with an anticipated $7 billion surplus. Although 2022 is a bonding year, the legislature has the option to pass a supplemental budget. Gov. Walz has proposed a supplemental budget focused heavily on education, including universal pre-K. He included $100 million to fund “community stabilization” for Naturally Occurring Affordable Housing (NOAH). It doesn’t include much for the environment. We applaud the governor’s proposal for NOAH stabilization, but would like to see a larger amount put into affordable housing overall, in addition to addressing the climate crisis.

Session Start: The legislative session started Monday, January 31. The week prior, the House Climate Caucus released a proposed Climate Action Plan, but nothing complementary exists in the Senate yet. 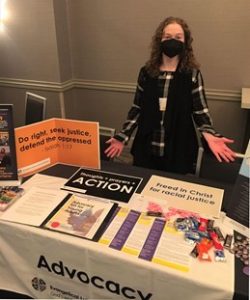 does include $350 million for affordable housing, and $75 million for homeless shelters. The proposal from Homes for All, a state-wise coalition of which LA-MN is a part, calls for $400 million in Housing Infrastructure Bonds (to build more affordable housing), $100 million in bonds for repairs/renovation of Public Housing, and $75 million for shelters. The governor’s proposal also includes $262 million on climate change concerns and natural resources, much of which would focus on electric vehicle charging infrastructure and stormwater construction.

Youth Extravaganza: Hunger Advocacy Fellow Rachel Wyffles recently had the opportunity to engage and introduce youth ministry leaders from across the country to advocacy at the ELCA Youth Ministry Network Extravaganza in Minneapolis. She even prepared a fantastic Youth Advocacy Resource for participants!

2nd Session of the 55th Legislature races towards the finish.

The New Mexico Legislature’s current 30-day session came to an end at noon on February 17. Though down significantly from previous 30-day sessions, about 450 bills have been introduced. LAM-NM has been tracking more than 60 bills, actively speaking in support or opposition to those identified as priority legislation.

Affordable Housing & Homelessness – Support for legislation that did not make it out of last year’s session, that would update landlord-tenant relations by increasing time to remedy; for legislation that would ensure annual appropriations to the NM Housing Trust Fund, enabling it to greatly increase the building of low and affordable housing; and for funding of programs that can prevent and assist people experiencing homelessness.

Healthcare – Support for legislation that would help identify those low-income and uninsured New Mexicans, connecting them to free or low-cost health insurance plans; for expanding school-based health clinics; and for continued funding for the study of NM’s Health Security Plan.

Hunger – Support for additional emergency funding for New Mexico food banks, and for the Governor’s $24 million appropriation request for the state-wide Food, Farm and Hunger Initiative.

Tax Policy – Opposition of legislation to exempt Social Security from the state’s personal income tax for upper income seniors, preferring instead to see the issue considered during an upcoming, comprehensive overhaul of New Mexico’s tax structure; and of other tax cuts for the same argument.

Care of Creation – Support for legislation that promoted restoration of abandoned uranium mines; for environmental rights; and for the Clean Future Act.

Election & Redistricting Reform – Support for legislation that would amend the state’s constitution to create a permanent Citizen’s Redistricting Commission.

Strong schools today lead to hunger-free communities tomorrow! Schools are essential in making sure kids are fed so they can learn, students are prepared for the workforce of tomorrow, and future community leaders are prepared to address our communities’ most pressing needs with compassion and wisdom.

Register for the zoom here

In 2022, the Hunger Network will host a series of informative zoom meetings to discuss important issues in our communities and how our faith communities can respond through service and advocacy to make sure every child is fed. On February 23, at 1pm, we invite Ohioans to learn about the impact of our public schools on our communities and their role in ending hunger. You can register for this event here.

DID YOU KNOW? The Ohio River connects the state with a large inland river system that brings business to and from over 85% of the nation’s major cities. As people of faith, water is holy and sacred to us and just one example of God’s abundant grace that provides for us everyday. Ohio should be proud of our water and seek to protect it moving forward. If you are passionate about clean water in Ohio, please contact our director, Nick Bates at Nick@hungernetohio.com to help us build our water advocacy team!

LAMPa and other hunger advocates cheered increases for food security programs in Gov. Tom Wolf’s 2022-23 budget proposal. The spending plan calls for a $2 million increase in the Penn. Agricultural Surplus Program, plus two new food security measures – a $1 million grant to encourage colleges to address hunger, and a $14 million provision to increase minimum Supplemental Nutrition Assistance Program benefits for seniors and Pennsylvanians with disabilities to $35 from $20. The State Food Purchase Program, which saw a $3 million increase in 2021, is proposed to be level funded. 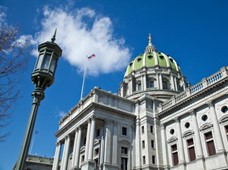 “As the economy recovers from the pandemic, some households, especially those who were already living at or near poverty, are still experiencing hardship,” said LAMPa Director Tracey DePasquale. “Rising food prices are putting a strain on family budgets, increasing the need for charitable food, while at the same time, decreasing the purchasing power of food banks.”

LAMPa also applauded a $10 million proposed state disaster assistance fund for those experiencing a federally declared disaster who do not qualify for traditional assistance.

In addition to budget advocacy, LAMPa is working with coalition partners to address an underlying cause of hunger – housing insecurity. As housing costs skyrocket, we are advocating to lift the cap on the realty transfer tax dedicated to the Pa. Housing Accessibility and Rehabilitation Program.

As the new session begins, LAMPa is also monitoring elections/voting legislation and working with senate staff and criminal justice reform advocates on legislation to support independent investigations in police use of deadly force.

Wednesday Noon Live: We interviewed Deb Martin, Oshkosh, and Cindy Dobberke, Mukwonago, to discuss their work with other hunger leaders to network around Wisconsin and the Upper Peninsula of Michigan to counter hunger. They discussed the three sessions – All who Strive a World Without Hunger, which they organized with other hunger leaders. LOPPW is a part of the group to add an advocacy perspective on hunger and gave a brief presentation during the first session.

Youth: LOPPW met with representatives from six synods to discuss plans for a listening session for youth to learn about their interests in social justice.