STATE OF THE UNION & ADVOCACY PRIORITIES: On Tuesday, Jan. 30, President Trump addressed our nation and introduced this administration’s major priorities for 2018. The annual State of the Union speech provides an opportunity for Americans to learn about the policies our president hopes to focus attention on in the upcoming legislative year. In response to this important moment, ELCA Advocacy presented our public policy priorities for 2018.

The ELCA Advocacy policy action agenda focuses the work of the Washington, D.C., office on current issues central to sustaining a just world where all are fed. Issue selection is based on many factors, starting with prayerful consideration of God’s vision for a more just world. Issue agendas are based on concerns that the ELCA has identified and spoken about through social statements, churchwide assembly memorials or other authoritative documents. You can read more at the ELCA Advocacy Blog. 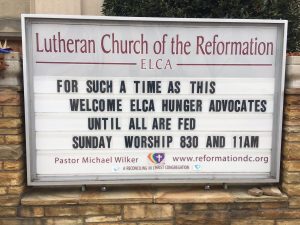 JANUARY HUNGER LEADERSHIP GATHERING: On Jan. 23, approximately 150 Lutheran hunger leaders from across the nation gathered on Capitol Hill to advocate for policies and provisions in the 2018 farm bill. Reauthorized roughly every five years, the farm bill determines far-reaching rules that affect food assistance and agricultural development, research, land usage, farm and energy production – both in the U.S. and abroad.

Lutheran leaders held over 130 visits with congressional offices in which they called on Congress to support comprehensive solutions that affirm Lutheran values and shared stories about ways their ministries and local communities are affected by policies in the farm bill. Lawmakers are debating early drafts of the bill now, and this month is a critical time for action! Advocates can reach out to their members of Congress at the ELCA Action Center.

FEB. 21, PRAY. FAST. ACT: The February day to #PrayFastAct is Wednesday, Feb. 21! This month, we are mindful of the injustices levied upon American Indians and Native Alaskans. There are approximately 1.9 million American Indians and Alaska Natives whose ancestors have ceded millions of acres of land that has made the United States what it is today and who also were, and are, subjected to various forms of physical and social injustices. As Lutherans, we have an obligation to work, pray and give to respond to and end those injustices. Resources and a shared statement from ELCA Advocacy and The Episcopal Church will come later this month.

Though Congress passed a temporary stopgap measure to keep the government open for several weeks, lawmakers will need to pass a new spending deal by Feb. 8. Faith advocates can reach out to their representatives on top budget priorities at the ELCA Action Center and through action alerts focused on the “For Such a Time as This” campaign. 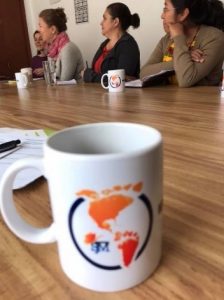 The trip focused on learning more about the services and gaps for Central American children and families, and asylum seekers in Mexico, and making connections with existing organizations to ensure the protection of children and families. The delegation met with civil society, government officials and representatives of international organizations. We confirmed that the number of people seeking asylum in Mexico continues to go up.

SYMPOSIUM FOCUSES ON MIGRATION – DISPLACEMENT AND MARGINALIZATION, INCLUSION AND JUSTICE: The Fourth Annual Symposium on the Role of Religion and Faith-Based Organizations in International Affairs was held at the United Nations on Jan. 22, organized by the ACT Alliance, the General Board of Church and Society of the United Methodist Church, the General Conference of Seventh-Day Adventists, and the World Council of Churches.

The symposium focused on migration: displacement and marginalization, inclusion and justice. Since its inception in 2015 the symposia have discussed human dignity and rights; prevention of atrocity crimes and violent extremism; and just, inclusive and sustainable peace. 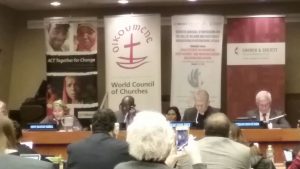 The tone was set as U.N. Deputy Secretary-General Amina J. Mohammed welcomed approximately 250 participants and said that 2018 offers an excellent opportunity to ensure that migration is undertaken in a safe and orderly manner as the United Nations negotiates global compacts for migrants and refugees. Mohammed urged faith-based organizations to be involved in this process however possible. She noted that she comes from the Fulani tribe, a group widely dispersed in the Sahel and West Africa, pointing out that “refugees and migrants are not the other; they are us.”

The Rev. Dr. Olav Fykse Tveit, World Council of Churches general secretary, asked, “What does it mean to be a human being in the world today?” ACT Alliance General Secretary Rudelmar Bueño de Faria said faith-based organizations need to focus on the person and reminded participants that migration itself is not a problem – “What does need fixing is the continued violation of the human rights of migrants.”

Dennis Frado shared perspectives provided by the experiences of several Lutheran World Federation’s (LWF) country programs including Kenya, South Sudan, Uganda, Myanmar, Central African Republic, Cameroon and Colombia. To protect and assist unaccompanied and separated children in refugee and internally displaced situations, LWF has partnered with UNICEF, the Office of the U.N. High Commissioner for Refugees (UNHCR), other non-governmental organizations and host governments to set up child-protection and education programs. Using a community-based approach, LWF builds the capacities of foster parents, teachers, care-givers and community members to understand and protect child rights as well as strengthen mechanisms for prevention and response to rights violations.

LWF works with UNHCR and host governments in welcoming and receiving asylum seekers, including the provision of first-line services by managing transit and reception centers, including registration and identifying specific vulnerabilities and capacities among the affected populations.

In addition to providing basic education at two refugee camps in Kenya and six camps in South Sudan, incentives there promote the enrollment and regular attendance of girls, given the numerous barriers to girls’ education.  Another focus is on accessibility for and inclusion of physically challenged youth to education. Malnutrition, child health and regular attendance concerns are addressed through school feeding programs. 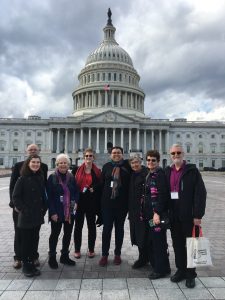 ELCA HUNGER LEADERS GATHERING: A highlight for January was the ELCA World Hunger Leaders Gathering in Washington, D.C., with about a dozen people from the three synods that cover California, including two students from California Lutheran University.  “A Day on the Hill” included delegation meetings with staff for senators Dianne Feinstein and Kamala Harris, and a number of meetings and drop-in visits with California’s large House delegation.  Farm bill reauthorization was the focus, and a primary emphasis was on the food-aid provisions, such as the Supplemental Nutrition Assistance Program.

LEGISLATIVE SESSION UNDERWAY: The Colorado General Assembly convened on Jan. 10. In the first three weeks of the session, several bills have been introduced that Lutheran Advocacy Ministry-Colorado is supporting. These include: 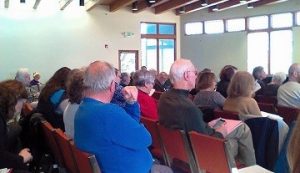 2018 BISHOP’S LEGISLATIVE LUNCHEON & ISSUES BRIEFING: This year’s event began in the morning with about 160 advocates from around New Mexico gathering to learn about issues included in the 2018 LAM-NM Advocacy Agenda and that are being considered in the current legislative session.      Advocates were from ELCA congregations as well as from Methodist, Presbyterian, Episcopal, and United Church of Christ congregations. Breakout sessions included “Negative Impacts of Taxing Food” and “Health Care in NM: Opportunities & Challenges in 2018 and Beyond.” In the morning, Bishop Jim Gonia spoke about “incarnational advocacy.”

During the luncheon, St. Timothy Lutheran Church in Albuquerque was recognized with the Haaland Advocacy Award. State Sen. Bill O’Neill and state Rep. Alonzo Baldonado were honored as Legislators of the Year for their work on “Ban the Box” legislation. Bishop Gonia “connected the dots” of Luther’s explanation of the Ten Commandments with service to our neighbors through advocacy. Following the luncheon, about 25 advocates visited the capitol to talk with legislators and become familiar with the building. 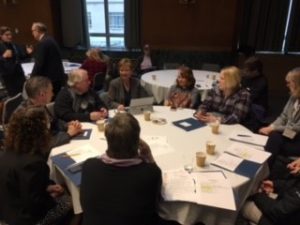 ELCA WORLD HUNGER: Eleven hunger leaders from across Pennsylvania, accompanied by LAMPa staff, participated in the ELCA World Hunger Leaders Leadership Gathering Jan. 21-24. More than 150 leaders from across the country gathered in Washington, D.C., where they learned about the root causes of hunger, shared stories of their ministries, and advocated for the farm bill with their members of Congress.

P.A. BUDGET: The Pennsylvania Legislature begins its process of working with the proposed annual state budget that Gov. Tom Wolf presents on Feb. 6. LAMPa has been working with partners to prepare requests for the governor’s budget proposal. We will continue to monitor the process and share alerts with constituents as budget formulation continues.

ASHES-TO-GO: For the third year, LAMPa is organizing Ashes-to-Go at the Capitol. Ecumenical partners are invited to assist in offering prayers and imposition of ashes for those who wish to receive. LAMPa’s network is encouraged to invite their lawmakers and staff to participate since many will not be in their home communities for Ash Wednesday.

LUTHERAN DAY 2018 “Let Justice Roll Down Like Waters”:  State Sen. Judiciary Chair Stewart Greenleaf will be the keynote speaker at LAMPa’s annual day of advocacy on May 21. LAMPa will recognize Greenleaf for his many years of service and for being a champion of criminal justice reform.

STATE POLICY UPDATE: FAN’s Interfaith Leadership Council had its annual session meeting with the governor. Fourteen faith leaders, including two ELCA bishops, two Muslim leaders, a Rabbi, and a leader each from the United Church of Christ, the United Methodist Church, American Baptist Church, and Quaker community, discussed five policy issues: criminal justice, racial justice, the environment, the supplemental budget, and poverty. We are very pleased that two racial equity bills are now heading to the governor’s desk: Breakfast After the Bell (BAB) and the Voting Rights Act (VRA). The BAB will increase access to breakfast for kids of color and help improve their test scores. The VRA will enfranchise communities of color in our state by transitioning to a district voting system from an at-large voting system. The status of bills on our legislative agenda can be found on our Bill Tracker.

INTERFAITH ADVOCACY DAY: Our annual advocacy day in the state capital will be Feb. 20; see a flyer. We will also host an advocacy day on the other side of our state, in Yakima on Feb. 10. These days follow the success of our regular legislative conference in Spokane, where we did a joint presentation with the Catholic Conference for over 160 advocates.

ELCA D.C. HUNGER CONFERENCE: Paul Benz represented FAN at the D.C. Hunger Conference this year and had a great time guiding the eight-member Washington delegation around to visit eight offices of our congressional delegation, including a meeting with Sen. Maria Cantwell and two of her staff on the farm bill, DACA and other related budget issues. 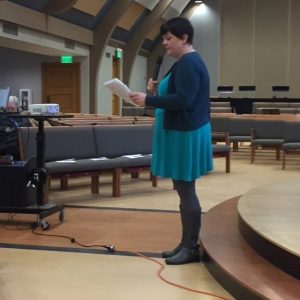 CO-LEADING ON ADVOCACY: The director led the first of two advocacy conferences with Bishop Gerald Mansholt in the East Central Synod. Bishop Mansholt focused on advocacy, immigration and refugees. The director focused on how to create an advocacy ministry in congregations using several exercises from the new LOPPW resource, “Our Church Our World: Partnering in God’s Mission.”

The director also co-led a workshop with an advisory council member, Lisa Hassenstab (left), on another one of our relatively new resources, a devotional on the social statements, as part of introducing advocacy into a congregation. 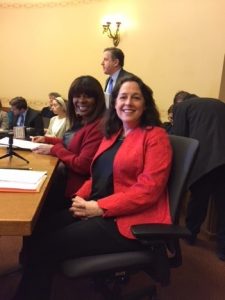 CONFERENCES IN WASHINGTON D.C.: The director accompanied other Wisconsinites to the offices of two senators and two representatives (right, Sen. Ron Johnson’s office) to advocate for a healthy farm bill as part of the ELCA World Hunger event. The director also attended the Forgotten Luther II symposium.