“Because we understand each person to be made in God’s image — without distinction based on race, ethnicity, gender, economic class or country of origin — and have heard God’s call to serve the needs of our neighbor wherever she or he may be, we recognize ourselves to be in mission and ministry together for the benefit of all God’s people.”

In the past few weeks, the Trump Administration announced they will begin separa 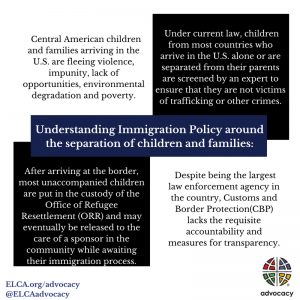 ting all children from their families at the border, the Department of Health and Human Services (HHS) disclosed that it lost track of over 1,000 children that made the journey alone to the U.S. and the American Civil Liberties Union reported cases of abuse of children by U.S. Customs and Border Protection (CBP) during the Obama Administration.

The criminalization of children and families seeking protection in the U.S. is, unfortunately, nothing new. To respond to this crisis, the ELCA passed the AMMPARO Strategy in 2016 to accompany these vulnerable populations in their countries of origin, in transit and in the U.S. As this Administration continues to harshly target people who are seeking safety, here are four things you need to know and two ways to get involved.