Most Americans incorrectly assume that federal laws will protect someone being evicted from their home or turned away from a place of business for the sole reason of being part of the LGBTQ+ community. There are no such laws.

But there could be. The Equality Act, a landmark piece of legislation which has already been passed in the U.S. House, would add the words “sexual orientation” and “gender identity” to the Civil Rights Act, affording protections in employment, housing, public accommodations, federal funding, credit, the jury system and more.

The Equality Act ensures that patients are able to receive treatment from doctors and life-saving prescriptions from pharmacists. It gives people the freedom to shop wherever they choose for the food and the necessities needed to live. It will let them enroll in any school, use any bank, and be a part of their community. In short, it will allow them to “live and move and have their being” (Acts 17:28). 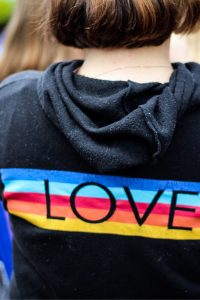 The need for protections provided by the Equality Act is urgent. Evictions based on discrimination can continue unabated. Funeral homes turn families away in their moment of grief. Perhaps the most egregious example is a law passed by Arkansas that allows doctors to refuse to treat LGBTQ people. This is not an exemption from certain procedures, but any form of treatment for LGBTQ people.

The Apostle’s Creed states: “I believe in God, the Father almighty, creator of heaven and earth.” As Lutherans we believe that God abundantly provides everything we need to nourish this body and life, including clothing and shoes, food and drink, house and land, spouse and children, fields, animals, and all we own (The First Article in Luther’s Small Catechism). If we believe God grants us our daily necessities, why would we support laws that block people from accessing those necessities?

I’m a deacon in the ELCA with a calling to be both an advocate for LGBTQ people and a youth minister for LGBTQ youth, witnessing a massive attack on the most vulnerable among us – transgender youth. States have passed laws designed to socially isolate transgender youth from their peers by banning them from participating in high school athletics. Two states have cut off transgender youth from affirming medical care and turned supportive doctors who provide treatment into criminals. Their bodies and their experiences are put under scrutiny, even by some who are claiming religion as a way to erase their existence.

Jesus had harsh words for those who placed burdens in front of young people, using our faith and piety to drive them away from our faith and the God who loves and created them. It was important enough that both Matthew (18:6) and Luke (17:2) quote Jesus saying it would be better for you if a millstone were hung around your neck and you were thrown into the sea than for you to cause “one of these little ones” to stumble.

The use of religion as a reason to deny someone else the fullness of life is not an exercise of faith, but the weaponization of faith, using it to inflict harm and suffering upon others.

We need the Equality Act to protect real, everyday people in every state from outbursts of violence, discrimination and harm, as the first use of the law is intended to do (The Purposes of the Law in Luther’s Small Catechism, With Explanation). There is no Lutheran understanding of using the law or our religion as a reason to inflict suffering or discriminate.

State of the debate 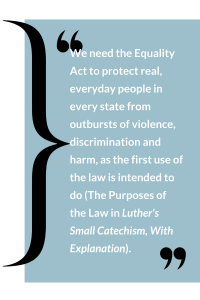 The Equality Act passed the House for the second time in February 2021, but it’s future is uncertain in the Senate. Currently, senators are hearing from those who oppose the protections in the Equality Act at a rate far outpacing those who support. Sadly, those opposing the Equality Act are claiming both Christianity and the and the false assumption their faith might be hampered by a law that prevents people from being fired, evicted, or denied goods and services.

While senators debate and negotiate, they need to hear from Lutherans who believe that God has richly and daily provided us with all we need to support body and life. People need to know that Christians stand on the side of loving our neighbor, and that, in this instance, love looks like allowing LGBTQ people to live, work, shop and exist anywhere free from fear of discrimination and violence.

Please contact your Senator to tell them to support the Equality Act (Action Alert available). If they don’t support it, let them know that, as a Christian, you believe in protecting the neighbor from harm. If they do support it, say thank you. If they are on the fence, let your call be what pushes them to defend the vulnerable and marginalized. And then tell your friends, family and community. The Equality Act can only pass by letting people know that Christians support love, and love is letting your neighbor live fully and abundantly.

* Deacon Ross Murray is founding director of The Naming Project, and Senior Director of the GLAAD Media Institute. He is the author of Made, Known, Loved: Developing LGBTQ-Inclusive Youth Ministry