Congress is currently considering two competing bills which would codify civil rights for LGBTQ+ individuals in the United States, the Equality Act (H.R. 5) and the Fairness for All Act (H.R. 5331). The Equality Act has passed the House of Representatives and is now being considered by the Senate. One of the most significant points of dispute is how the two bills would treat religious objections. The Fairness for All Act would provide robust protection for religious objections, at the potential expense of weakening the civil rights of LGBTQ+ individuals. In contrast, the Equality Act would reduce protection for religious objections by exempting the Equality Act from the provisions of the Religious Freedom Restoration Act. The debate between these bills has set up a false choice between equal rights and religious freedom. 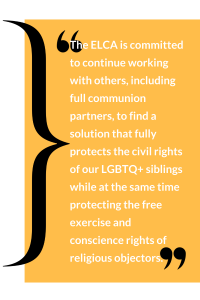 The ELCA supports equal rights for our LGBTQ+ siblings. The ELCA’s social statement Human Sexuality: Gift and Trust (2009) states that the “dignity of the human being reflects God’s deep love and stands against all forms of violence, discrimination, and injustice” [page 5]. As a result, the ELCA “opposes all forms of verbal or physical harassment and assault based on sexual orientation. It supports legislation and policies to protect civil rights and to prohibit discrimination in housing, employment, and public services” [page 19].

At the same time, the ELCA supports the religious freedom and independence acknowledged in both the free exercise clause and the establishment clause of the First Amendment to the U.S. Constitution. These clauses work together, not at cross-purposes, to protect the freedom of believers and non-believers alike from oppression and forced indoctrination. As stated in the ELCA social message on “Human Rights” (2017), the ELCA will “advocate for the U.S. government to protect and promote the equal rights of all people, as enshrined in the U.S. Constitution and Bill of Rights” [page 12]. When the Supreme Court ruled that the First Amendment did not protect the rights of Indigenous citizens to use peyote sacramentally, the ELCA joined with its full communion partners and many others across the political spectrum to support the adoption of the Religious Freedom Restoration Act (RFRA). RFRA requires that federal laws which substantially burden religious freedom be narrowly tailored to a compelling governmental interest.

Equal rights and religious freedom must coexist. Human Sexuality: Gift and Trust both expressly endorsed the extension of civil rights laws to our LGBTQ+ siblings [page 19] and recognized that people could disagree about Scripture and come to one of four different conclusions regarding same-gender marriage with conviction and integrity [pages 19-21]. Accordingly, it encouraged “all people to live out their faith in the local and global community of the baptized with profound respect for the conscience-bound belief of the neighbor” [page 21]. 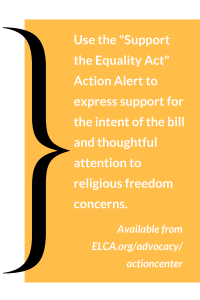 Ongoing commitment to a fair solution

We urge the adoption of legislation that ensures the full rights of LGBTQ+ persons without infringing on religious liberty or permitting improper government interference in the ecclesiastical activities of religious organizations. Blanket exemptions for anyone claiming a religious motive are too broad and would eviscerate necessary civil rights protections for historically marginalized groups. Not providing space in which dissenting religious groups can practice their beliefs free from government interference, however, would gravely damage freedom of conscience. Moreover, fully exempting statutes from RFRA sets a dangerous precedent of permitting the government to forcibly impose the views of the majority on minority religions, a precedent which could easily be weaponized by a future Congress and President. For these reasons, the ELCA is committed to continue working with others, including full communion partners, to find a solution that fully protects the civil rights of our LGBTQ+ siblings while at the same time protecting the free exercise and conscience rights of religious objectors.