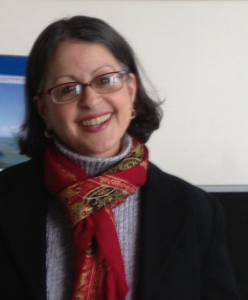 by Mary Hansen-Joyce, ELCA seminarian and delegate to the United Nations Commission on the Status of Women

As I attempt to say in this space what my experience has been, the words “universal” and “solidarity” stand out. Our unique personal stories and interests are obviously diverse, yet undeniably universal as female children of God. When we come together to share our stories and experiences, as well as our shared prayer for the violence to end, we find solidarity in our commitment to work toward the end of the violence. With one voice, united and emboldened through the history of ecumenism, we seek to remain strong and vocal about the reality of violence again women.

The numbers are staggering to me. Seven in ten women worldwide are affected by some form of violence in their respective cultures and communities. One in three members of every church community in the United States is affected in some way by domestic violence. Women and girls are dying daily because of the violence that has been embedded for generations in the culture and the religious traditions of their communities. No country is immune. This can, and must be, changed.

The facts are often overpowered by culture and faith traditions, social stressors, economic pressures and political tactics. There is clear evidence that the welfare of all individuals is improved when women and girls are educated and treated equally.

Nevertheless, it will take continued courage and determination, which is why I hope that this year is the first of many years that I will travel to New York City for the Commission on the Status of Women. As a result of attending the event this year, I am bringing back the book “When Pastors Prey” (published by the World Council of Churches) to be considered as part of the seminary curriculum in the future. I am bringing into my future ministry as an ordained pastor the undeniable need to remain connected to these issues, and the women and men involved in them. I also bring the belief that anything I can do to inform both men and women, and engage in dialogue and ministry with my community toward the elimination of violence, is God’s work.