Devotional: When we hear “Go”

Paul, as described in Acts 21, arrived in Jerusalem to some strong responses. Buoyed by a crowd incensed by rumors that he was encouraging Jews to no longer observe Jewish law, a Roman tribune arrested and interrogated Paul to determine his crime. Following the Jewish law was central to the life of those identifying as God’s chosen people, and this man was accused of overturning the practices and covenant of their ancestors. (I probably would have been similarly roused. In fact, as I learned more about the history and present-day legacy of colonialism among communities with which I identify, I was roused – but I digress.)

We’ve heard a lot of rhetoric about our laws recently – from politicians, from pulpits, and most recently, from angry mobs of people rallying around a cry to hold fast as a country to tradition or law and order. The Constitution, the source document from which the laws of the U.S. came to be, is considered by many to be the ancestral heritage of the U.S. To many it’s what makes this country unique, and identity as “Americans” is marked by adherence to following law. As in Paul’s day, it becomes a problem now too when someone is accused of attempting to disregard the law for their own purposes.

But what was Paul doing, if not what he was accused of?

A moment of confusion 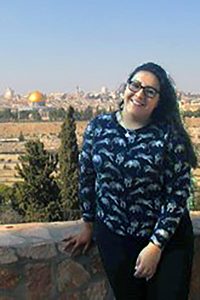 Acts 22 is known today as the account of Paul’s conversion. He was in Jerusalem because he had been given explicit instructions described to go (v. 10) and to do (v. 16). He attempted to convey this to the angry crowd, saying he lived “according to our ancestral law” (v. 3), saying it was as precious to him as it was them. He had dedicated his life to the law, to tradition, to persecuting those who sought to preclude the law with a new Way (v.4). Jesus, when addressing Paul on the road, anticipated the uproar when Paul testified to his encounter on the road.

When Paul tells of his conversion, he’s been confronted with his sins. Like many in the crowd, pre-conversion Saul had used the law and tradition to persecute and oppress others (even though many had heard of Jesus’ making an entire speech in Matthew 25 about how any treatment of the oppressed and marginalized among us is done as though it were being done to Jesus Himself… again, I digress). He asks Jesus, “What am I to do, Lord?”

The interesting thing about what Jesus says? He doesn’t tell Paul anything. He just says to go.

“What am I to do, Lord?” is a question we must ask ourselves daily. It is a question I ask about my work in advocacy. The response is always the same: Go.

After his encounter with Jesus, Paul tells us, “those who were with me took my hand and led me to Damascus” (v. 11). Like Paul, we need accompaniment in our mission. The task of pursuing God’s call on our lives as believers is a charge made possible by the indispensable resource of community. As we “go,” we do not journey alone. In the work of advocacy, we do not labor for justice alone. The work of advocacy is a journey to join God in restoring all things to Godself. The work is urgent, as we strive to ensure the needs of those made vulnerable to suffering are met. 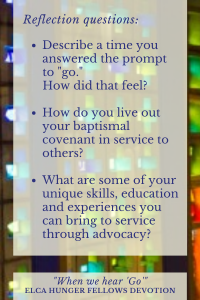 As it was with Jesus’s, Paul’s baptism (v. 16) marks him as a member of the Christian community and as at the beginning of his work. And as it was with Paul, our baptism marks us as members of the Christian community and the beginning of our work. As Lutherans, our commitment to advocacy comes in response to our baptismal covenant, just as Paul’s faith and mission were confirmed by his baptism (v. 16).

Paul was forgiven his sins of persecution in order to be proactive in his commitment to Christian community and faith. We must repent of the sins in which we unknowingly (and sometimes knowingly) participate. Judgment. Discrimination. Apathy. Inaction.

Forgiveness leads us to repent of our sins and move forward in faith. A recent example of repentance is the commitment to anti-racism that individuals and organizations have made to turn away from discrimination and become proactive in using anti-racist language, behavior, etc. To repent of racism is to live out anti-racism.

Ananias tells Paul, “And now, why do you delay? Get up, be baptized, and have your sins washed away, calling on his name” (v. 16). Ananias’ words to Paul reinforce what Jesus said to Paul on the road: get up and get moving – why do you delay?

And it is a sending I take with me, along with you, in advocacy action.

* This New Year Devotional Series has been composed by the three ELCA Hunger Advocacy Fellows serving in 2020-2021. “The ministry of ELCA World Hunger involves young adult engagement in conversations and formulating solutions to this systemic and universal obstacle to physical and spiritual well-being. Hunger is one of the key issues we must address as a church, for injustice and inequity are consistent themes across our local and global food systems. One way to address hunger and ensure young adult involvement in the ELCA and in World Hunger’s faith-based work is by funding the Hunger Advocacy Fellowship (HAF) position, a year-long contract position designed to cultivate the leadership of individuals looking to halt the expanding reach of hunger through advocacy,” describes Taina Diaz-Reyes, Hunger Advocacy Fellow in D.C.

Taina Diaz-Reyes‘ placement is with the ELCA advocacy staff in Washington, D.C. She says: “I am a ‘Lutheracostal’ originally from Tucson, Ariz. but raised in the D.C. area. It was here I was exposed to the power of protest and political movements present in the city over the course of my youth. I graduated from the George Washington University with a BA in Geography and Sustainability, then completed the MDiv/MA in Sustainability dual degree program at Wake Forest University in December 2019. My personal and professional interests lie in the food-climate-policy nexus and the theological frameworks that help Christians determine points of action for racial equity, food security, climate justice and decolonization. My hope is to gain skills that will help me advance the pursuit of food justice via theologically-informed advocacy.”