When the ELCA signed a request of President Biden to host a White House Conference on Food, Nutrition, Hunger, and Health, the group of organizations stated: “We can end hunger in America, and a public commitment to a White House Conference, with ending hunger as a key priority, is an essential step in accomplishing this goal” (March 14, 2022 Letter). The conference sponsored by the White House on September 28 became the second of its kind in over half a century. Tackling hunger, nutrition and health in America was the theme, accompanied by the announced Biden-Harris Administration National Strategy on Hunger, Nutrition, and Health.

Hunger in the United States 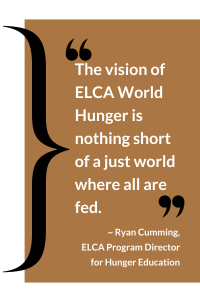 According to the White House data on hunger, nutrition and health, 1 in 10 American households experience food insecurity. Additionally, diet-related diseases are some of the leading causes of death in the United States of America: 10% of Americans have diabetes, 1 in 3 Americans will have cancer in their lifetime, and more than 40% of Americans suffer from high blood pressure. These grim statistics disproportionately affect communities of color, people living in rural areas, people living in U.S. territories, people with disabilities, older adults, LGBT community members, military families and veterans. It is with this landscape that the work being done by government programs such as Supplemental Nutrition Assistance Program (SNAP); Special Supplemental Nutrition Program for Women, Infants, and Children (WIC); school meals and Child Tax Credits (CTC) is important for meeting basic needs. Among ELCA federal policy prioritization is supporting the strength and reach of these programs.

Over 500 elected officials, advocates and activists, and leaders of business, faith and philanthropy groups from across the United States convened in Washington D.C. as well as virtually to discuss the Administration’s goal of “ending hunger and increasing healthy eating and physical activity in the U.S. by 2030.” The first step toward achieving this goal was announced by President Biden: the commitment of $8 billion by public and private sectors toward helping to provide more food and better nutrition by 2030.

It is through the release of the 44-page Biden-Harris Administration’s National Strategy on Hunger, Nutrition, and Health that the White House gave a direct and detailed plan. This strategy calls for a “whole-of-government” approach that is pursued across five pillars.

This Strategy and Our Convictions 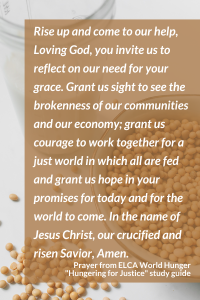 Non-governmental programs were highlighted by President Biden during the conference, and he expressed that “everyone has an important role to play”. This includes private and non-profit efforts, to which ELCA congregations, social ministries and ELCA World Hunger initiatives are deeply committed.

The Alliance to End Hunger, in which the ELCA is a member, noted the significance in the White House plan of intending to end hunger for millions by reducing the number of households defined as having a very low food security to less than 1% and by cutting the number of households defined as food insecure by 50% by 2030. “The White House laudably built its strategy based on feedback from stakeholders, the general public and those with lived experience of poverty and hunger… We now look forward to working with our diverse network to determine the action steps that will bring the plan to fruition.”

Recordings of panel sessions and plenary sessions are available online.