A year ago, I watched the storming of the U.S. Capitol with horror – outraged at the violence and assault on our democracy, fearful for the lives of public servants and appalled at the proliferation of Christian language and symbols used by the mob. I turned to the book of Isaiah that day, especially chapter 61 where the prophet promises comfort and restoration to those who mourn. 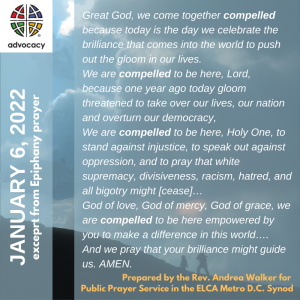 The prophet unveils a vision for rebuilding out of the rubble of national tragedy. In this vision the repair is led by those who have suffered most under the current order – the oppressed, the brokenhearted and the captives-. The blog post “Actual Renewal and Repair After Capitol Breach” explored this vision and the work of the church after January 6, 2021.

Since then, we have learned how the assault on the U.S. Capitol was more than a one-day event to block the counting of electoral votes. It was an action planned and supported at the highest levels in an ongoing effort to dismantle our democratic system and overturn an election. We continue to see states and local governments around the country pass voting laws that support that aim, making participation in our democracy more difficult, particularly for people who are poor and communities of color.

God calls us to the ministry of civic engagement as a vital aspect of discipleship that flows from our baptism. As Lutherans we affirm that “(t)he political health of our nation still suffers from the stain of antidemocratic exclusion. Efforts to restrict access to voting should be condemned and resisted,” (ELCA social message “Government and Civic Engagement in the United States: Discipleship in a Democracy,” p. 10). When individuals and communities of faith join efforts at the federal, state and local level to ensure voting rights and access to the ballot, this conviction is expressed. The ELCAvotes initiative will continue to provide focus and resources on civic engagement, voting rights and strengthening our democratic process for ELCA members and ministries as we head into the 2022 election year.

The events of January 6 call us to speak in one voice condemning Christian nationalism as a distortion of the gospel of Jesus and a threat to American democracy. We are called to understand the ways that Christian nationalism is linked to white supremacy, present not only in the language and symbols in the crowd at the Capitol, but also ingrained in our churches and institutions. The ELCA presiding bishop participated in “Democracy and Faith Under Siege: Responding to Christian Nationalism” on Jan 27, 2021, part of the Christians Against Christian Nationalism movement that helps Christians identify and respond to the threat. This webinar and other resources are available for starting conversations and confronting expressions of white Christian nationalism in your church or community. 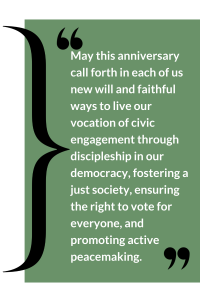 The Capitol siege was also made possible through the spread of disinformation as a political tactic, targeting people who have felt unseen and unserved by their government. It was intensified by narratives that persuaded Americans to believe that mob violence is an acceptable way to assert their views, with tragic losses of life and ongoing trauma for many.

Churches and faith leaders are still regarded as trustworthy sources of information. We have a unique responsibility for and reach into local communities. We need to use this access to push back against misinformation and teach non-violence even as we practice accompaniment by listening and respond to those who experience being cut off and cut out.

The ELCA social message “Government and Civic Engagement in the United States: Discipleship in a Democracy” states that “in a democracy, disorder and injustice have the potential to call forth civic engagement toward a constructive purpose” (p. 15). May this anniversary call forth in each of us new will and faithful ways to live our vocation of civic engagement through discipleship in our democracy, fostering a just society, ensuring the right to vote for everyone, and promoting active peacemaking.