Again Asking and Finding Steadfast Love in the Gloom of War

By the Rev. Amy E. Reumann, ELCA Senior Director for Witness in Society

The prophet Joel doesn’t hold back when sounding the alarm about the coming Day of the Lord in today’s Ash Wednesday reading. It will be “a day of darkness and gloom, a day of clouds and thick darkness! Like blackness spread upon the mountains a great and powerful army comes; their like has never been from of old, nor will be again after them in ages to come.” Joel goes on to remind the faithful that despite the terror they see, God’s true nature is “gracious and merciful, slow to anger, and abounding in steadfast love.” He calls on the priests to assemble the people, to repent, and to testify to all who may ask, “Where is their God?” that God is still with them. 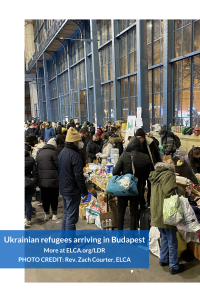 This year Joel’s alert sounds above the horror of the Putin regime’s invasion of Ukraine, a great and powerful army conducting an unprovoked attack against a neighboring state. The valiant resistance of Ukrainian leaders, the courage of civilians fighting back and resilience of so many inhabitants are inspiring. But they do not ease my deep dismay as Russian air strikes and ground fighting continue, and civilian casualties mount. Over three quarters of a million people (as of this writing), primarily women and children, have streamed across borders seeking safety. Many, many more are still to come in a growing humanitarian crisis.

Just like the grinding conflict and famine in the Tigray Region of Ethiopia or endless suffering in Syria and Yemen, the invasion of Ukraine and first days of war there can lead us to question: “Where is our God?” I ask it again when I hear about the plight of the Roma, a marginalized and undocumented people in Europe, facing bigotry as they try to flee. I ask again when reports of discrimination against non-Europeans trying to reach safety surface. I ask it again as I see Russian citizens bravely protesting the actions of their government for which they may expect harsh punishments. I ask it again as the questions about the potential for use of nuclear weapons in this war takes me back to childhood Cold War fears of annihilation.

Fred Rogers, host of the long-running show “Mister Rogers’ Neighborhood,” told the famous story of how his mother told him that in a tragedy he should “look for the helpers” to keep despair at bay. Today, the solidarity of so many around the world with Ukraine who step up to help reflects a glimmer of God’s steadfast love even in the gloom of war. 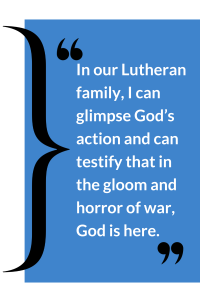 In our Lutheran family, I can glimpse God’s action and can testify that in the gloom and horror of war, God is here.

We don’t know when this military action will end. Much misery lies ahead and it may be unbearable. In addition to actions we take now as advocates and in relief work, Lutherans are called to confess the ways we have fallen short in our responsibility for peace, and dedicate ourselves anew to be students of peace and act for God’s shalom in our world. The ELCA social statement For Peace in God’s World teaches that peace is deeply rooted in God’s identity, that God suffers with and for our world of violence and the church is called to be a faithful presence, testifying to the God of peace in specific ways, as: 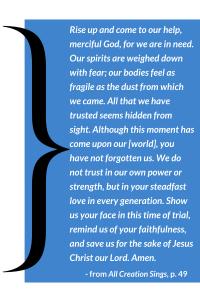 GUIDANCE OF GOD OF PEACE

As the war in Ukraine continues, the God of peace is here and calls us to maintain compassion and concern for all human suffering that results from conflict and war. The God of peace calls us to be active peacemakers who disturb, reconcile, serve and deliberate. The God of peace also calls us to hope, even when hope is shrouded by the pall of war, and to “give God no rest” until that day when the nations “shall beat their swords into plowshares, and their spears into pruning hooks; nation shall not lift up sword against nation, neither shall they learn war any more” (Isaiah 2:4).