The Office of the United Nations High Commissioner for Refugees (UNHCR) has been sounding the alarm bells on the plight of refugees and migrants for some time to call attention to the urgent concerns on populations on the move. There are approximately 65 million forcibly displaced persons, including over 21 million refugees, 3 million asylum seekers and over 40 million internally displaced persons (IDPs). In 2015, the number of migrants passed 244 million[1]. There are many reasons for migration, but in recent years, forced displacement of people is being driven by root causes such as conflicts, persecution, violence, loss of livelihoods and natural disasters.  Even so, all countries are somehow affected by migration.

A refugee, according to the United Nations Refugee Convention, is “someone who is unable or unwilling to return to their country of origin owing to a well-founded fear of being persecuted for reasons of race, religion, nationality, membership of a particular social group, or political opinion”[2].  The International Organization for Migration (IOM) defines a migrant as “any person who is moving or has moved across an international border or within a State away from his/her habitual place of residence…”[3]

The world keeps witnessing hundreds of people drowning at sea, exploitation and abuse of refugees and migrants and refusal of some countries to protect and assist them with the most basic services, such as food, shelter, health care, education, and safety.

The Ambassadors of the Permanent of Missions of Ireland and Jordan were appointed to facilitate the Summit process. Informal meetings and negotiations took place from February to July 2016. The negotiation resulted into an outcome document titled the “New York Declaration for Refugees and Migrants” which was formally adopted by the General Assembly on September 9, 2016, and Heads of State and Governments endorsed it at the High-Level Summit on September 19,2016. The Declaration commences a two multi-year process to prepare a Comprehensive Refugee Response Framework 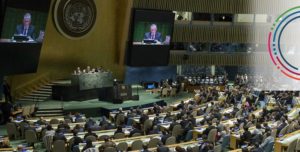 and a Global Compact for safe, orderly and regular migration.

CSOs responded to the outcome of the Summit saying “There is progress in this, but nowhere near enough. Some governments are ready with energy, practical solutions and political will to work together and with civil society, but too many governments continue to hold back”[4].

The Lutheran Office for World Community (LOWC) collaborated closely with the Lutheran World Federation (LWF) in advance of the summit as part of a civil society action committee. LWF endorsed the committee’s call for “A New Deal for refugees, migrants and societies” and a subsequent Act Now statement and scorecard. LOWC staff attended the Summit and is planning to be engaged with LWF in post-Summit follow-up activities in New York and Geneva. LOWC is also coordinating post-Summit follow-up with the Assistant Director for Migration Policy and Advocacy in the ELCA Advocacy office in Washington, DC.

Looking ahead, CSOs including FBOs are playing significant role to urge the implementation of the commitments that the governments made. The following are advocacy and action asks to Member States that you can use to urge them:

Let us remind governments that “Refugees and migrants may lose many things when they cross international borders, but never their human rights and dignity”[6]

Check out the following documents for more information:

[5] Act NOW: Civil Society advocacy and action in and beyond the summit.www.refugees-migrants-civilsociety.org