About a month back during the Week One action of the Poor People’s Campaign: A National Call for Moral Revival, I sat with a 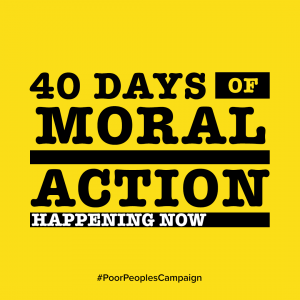 diverse group of justice-minded folks from across New York State blocking the doors to the Capitol Building in Albany. Wearing my collar and favorite stole, I was trying to accompany children, women and people living disabilities in saying how unnecessarily hard it is for so many in a state that puts itself out there as one of the most progressive places in the country. I was simply doing what I thought people on the Way of Jesus should be focusing on, and in the midst of all the singing and chanting, I got into a conversation with a young woman from Brooklyn sitting next to me.

Seeing my collar, she said something like, “Wow, there’s a lot of religious leaders here.” A little surprised, I responded with something like, “Of course there is, this Poor People’s Campaign is just picking up where MLK left off after all fifty years ago!” And then, she said something that struck me to the core after four years of ordained ministry… “Wow, I didn’t know religious people cared about important things.”

It was in that moment that I really began to realize how truly important the Poor People’s Campaign is. A lifelong Lutheran, I was born in 1986, and despite my childhood pastor preaching against the 2003 Iraq War and teaching about issues like hunger and poverty, I also spent my entire life in a context where many Americans, for a bunch of different reasons, seem to think following Jesus is more about making LGBTQIA folks feel unwelcome; telling women what to do with their bodies; and saving souls from eternal torment in the next life rather than saying much of anything good at all about how we ought to live both individually and collectively in this life.

Jesus was a refugee, a day laborer, after all, lynched in the manner of a political revolutionary by one of the most powerful empires the world has ever known specifically because he sought to challenge and change that system. While he talked about getting into heaven, for sure, this world, not the next, was the focus of his ministry. As it says on the stoles of two leaders of the Poor People’s Campaign, Rev. Liz Theoharis and Rev. William Barber, Jesus was a poor man. How then could followers of the Way of this poor revolutionary become identified with policing folks’ bedrooms but not saying much of anything about the systemic sins of poverty, racism, militarism and ecological devastation?

The “moral narrative” of this country, influenced in part by a false, ahistoric and heretical brand of Christian Nationalism that has almost nothing to do with the teachings of Jesus, has quite simply become distorted.

“A New and Unsettling Force: Confronting the Distorted Moral Narrative” is the theme for this week of the Poor People’s Campaign, and I pray you will join me, people of faith and others of good will across this country in doing just that.