ELCA YA Discernment: Lost, Leaning in, and Letting Go

Senior year in college, two weeks until the end of the first semester. You’re supposed to have everything figured out (so I thought). Thanksgiving break was quickly approaching, and I was dreading the moment I would be bombarded with questions from family members around the dinner table. We all know what I’m talking about…

“Do you have a job lined up after graduation?”

“What are you going to do with your life?”

Like any other college student, I wasn’t looking forward to it. Although it looked like I had everything figured out, I was beyond lost and confused.

As I walked into the McKanna-Sandrock Retreat Center of Lutheranch, I was overwhelmed, nervous, excited, and anxious for what was to come in the next 48 hours at the first-ever ELCA Young Adult Discernment Retreat. I was determined that I was going to have the next five years of my life planned out detail by detail before I got back on a plane to Illinois. 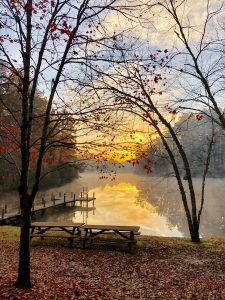 Quiet walking trails at Lutheranch in Tallapoosa, GA where the Discernment Retreat was held.

Well, that didn’t happen, however I left with something even better. I left with the understanding that it’s not about knowing what the next five years entails, it’s knowing what my next most faithful step will be.

I realized the next step on my journey was about how to lean in and let go – how to lean into discomfort and the unknown and trust the Holy Spirit with this next step. 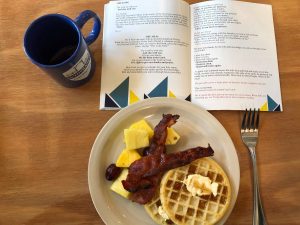 I take my coffee with a side of discernment (and also waffles).

Being in community with sixty lost, confused, eager and change-making young adults was comforting. Not only was everyone supportive, excited, and willing to listen, but everyone was willing to share their experiences and discern alongside me. This community listened to my wildest dreams and encouraged me to chase them, no matter how scary they were 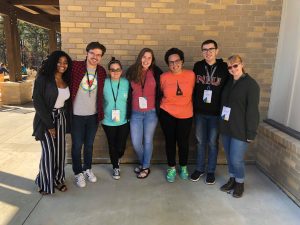 Once while Jesus was standing beside the lake of Gennesaret, and the crowd was pressing in on him to hear the word of God, 2 he saw two boats there at the shore of the lake; the fishermen had gone out of them and were washing their nets. 3 He got into one of the boats, the one belonging to Simon, and asked him to put out a little way from the shore. Then he sat down and taught the crowds from the boat. 4 When he had finished speaking, he said to Simon, “Put out into the deep water and let down your nets for a catch.” 5 Simon answered, “Master, we have worked all night long but have caught nothing. Yet if you say so, I will let down the nets.”  6 When they had done this, they caught so many fish that their nets were beginning to break. 7 So they signaled their partners in the other boat to come and help them. And they came and filled both boats, so that they began to sink. 8 But when Simon Peter saw it, he fell down at Jesus’ knees, saying, “Go away from me, Lord, for I am a sinful man!” 9 For he and all who were with him were amazed at the catch of fish that they had taken; 10 and so also were James and John, sons of Zebedee, who were partners with Simon. Then Jesus said to Simon, “Do not be afraid; from now on you will be catching people.” 11 When they had brought their boats to shore, they left everything and followed him.

I left that discernment weekend with this gentle but important reminder: God’s got this. I don’t need to worry, but I do need to trust the Holy Spirit. Just like when Simon, James, and John were all called out into the water to cast their nets out after a long day of catching nothing, they trusted Jesus. They returned with boats so filled with fish that they began to sink. My next most faithful step was considering how I might work on that level of trust in God. 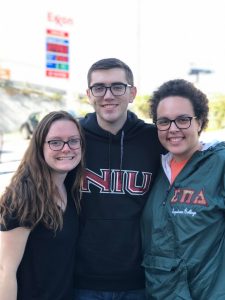 The discernment continues across the miles with these friends!

Fast forward a little over a year from the first discernment retreat, a lot has changed in my life. I’ve graduated from college, moved to a new city, met new people, and started working for the ELCA Youth Gathering. It was a scary, exciting, fast, adventure—but that is what this thing called life is. Still to this day, I think about the amazing community that I was a part of and hope and pray that they are still discerning God’s call for them, whatever that may be and that they are trusting to follow that call, even if they are tired and worn out. 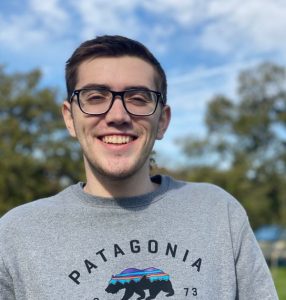 Justin Wilson serves as Program Associate for Communications and Administration for the ELCA Youth Gathering in Chicago, IL. He graduated from Northern Illinois University with a degree focused around Digital Marketing, Nonprofits and Social Entrepreneurship. Throughout college, Justin served four summers at Lutheran Outdoor Ministries Center (Oregon, IL), where he found joy and excitement in youth ministry. He also enjoys spending time outside, hiking, eating ice-cream and listening to Vance Joy.