Today’s post is from Krehl Stringer, pastor at New Salem Lutheran in Turtle River, MN. It is the first in a two part series on why and how to celebrate a Season of Creation in congregational worship. 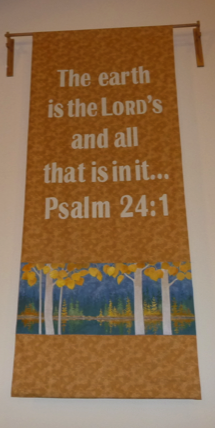 In a little drawer atop my dresser, there’s a post-it note on which I had written (some time ago I can’t remember when) two Hebrew words:  abad and shamar.  These two little words contain the essence of humanity’s purpose according to Genesis 2:15—“The LORD God took the man and put him in the garden of Eden to till it and keep it.”  At least that’s how most all of our English translations render this passage, but the words abad and shamar have a much richer, deeper meaning than what “till” and “keep” convey. Better is “serve” and “preserve,” which translation places humanity in extreme subservience to all that God has made, not in the more dignified dominion-bearing role we might prefer for creatures esteemed to be created “in God’s image” (Genesis 1:27), and “a little lower than God” (Psalm 8:5). Were we to allow subservience to capture the essence of what it means for us to be created in God’s image, how might this better conform us to Christ who was “the image of the invisible God” (Colossians 1:15), and “came not to be served but to serve, and to give his life a ransom for many?” (Matthew 20:28; Mark 10:45) Celebrating a Season of Creation can be an inspirational season of creativity when people learn to write abad and shamar in their own hand, allowing these words of Christ day by day to dwell in them richly (Colossians 3:16), and so remember their baptisms when they were clothed in Christ (Galatians 3:27), and born anew in the image of their creator (Colossians 3:10).

So how might a congregation begin to embrace and reflect the image of a church fully engaged in Christ’s mission: reconciling all things to God?  (Colossians 1:20) A congregation might proceed with its perceived strengths in ministry (focusing, for example, on adopting earth-friendly practices in the work of Stewardship, Pastoral Care, Social Justice, Education, Fellowship, or Property).  But my recommendation would be for a congregation to start with Worship, recognizing that for Lutherans, “worship stands at the center of our life of faith. Through God’s word, water, bread and prayer we are nurtured in faith and sent out into the world.” (www.ELCA.org/worship)  Imagine how a congregation’s core identity might be shaped and its gospel mission expanded by liturgical choices that honored the diversity of ecological relationships in which the triune God has placed human beings as created co-creators, co-healers, and co-sustainers with God.

Stay tuned for Part 2 of this post which will offer concrete ideas for celebrating a Season of Creation in your congregational setting.