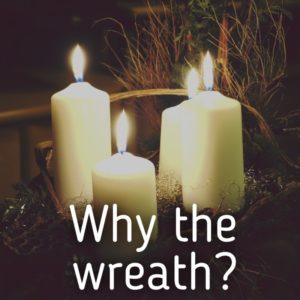 Today’s post is an excerpt from the ELCA Worship FAQ “What is the Advent Wreath and How is it used in worship?”

The Advent wreath has its roots in the pre-Christian practices of northern Europe. People sought the return of the sun in the dark time of the year (at the winter solstice) by lighting candles and fires. As early as the middle Ages, Christians used fire and light to represent Christ’s coming into the world. Using this same symbolism, the Advent wreath developed a few centuries ago in Germany as a sign of the waiting and hopeful expectation of the return in glory of our Lord Jesus Christ. The wreath, a circle, came to represent the eternal victory over death through Jesus Christ. The evergreens were a sign of the faithfulness of God to God’s people, even in death, and the lighted candles were a reminder of the light of Christ brought into the world.

This symbolism can be just as strong for us today. As is the case with all symbols, they speak most loudly to remind us of God’s promises of life when they are drawn directly out of our daily experience and environment. One should consider using only natural materials from God’s creation when making an Advent wreath. Evergreens come in many varieties and may be treated with a flame retardant substance. Branches of holly, laurel, and other green shrubs, which retain their freshness longer than pine, may also be used. The circular shape, a symbol of eternal life, is most important. Using an alternative shape, such as a log, would diminish the meaning of the symbol, which is no longer a circle. There is no one prescribed color for the candles, although several traditions are current. Four natural colored candles are always appropriate and symbolize the Light for which we wait. Four blue candles matches the blue used for the season, a color representing hope. Some assemblies may have the older tradition of using purple candles, keeping purple as the color for both Advent and Lent. The practice of using a pink candle on the third Sunday in Advent is no longer consistent with the current lectionary. This tradition arose when Advent was regarded as a thoroughly penitential season much like Lent. The third Sunday of Advent was called “Gaudete Sunday”, from the Latin meaning “Rejoice!” It had its roots in the text from Philippians 4:4-6, “rejoice in the Lord always…” These readings are still heard in Year C on Advent III.