Armistice Centennial Raises Cause of Peace

Today’s post is by Philip A. Gardner, Pastor of Trinity Evangelical Lutheran Congregation in Sandusky, Ohio.

It was to have been “the war to end all wars,” but that was a dream that didn’t last long.

World War I began in Europe in 1914.  Two years later, President Woodrow Wilson campaigned under the slogan, “He kept us out of war.” But that was short-lived. The United States entered the conflict in 1917, at a cost of over 100,000 lives before an agreement was reached on November 11, 1918, to end hostilities. Total war deaths are estimated at between 15 and 19 million.

Be it happenstance or serendipity, the 100th anniversary of Armistice Day, November 11, 2018, falls on a Sunday. It seems a perfect opportunity for a commemoration of those who served on all sides in one of the most brutal conflicts in human history.  It also offers an opportunity to raise up the hope of peace even as other wars continue, notably those in Syria, Yemen, and Afghanistan.

Our congregation worships at 8:00 and 10:30 am each Sunday, and I am planning a regular service at 8:00 using the appointed texts for the day (Lectionary 32). But, given the tradition of tolling bells at “the eleventh hour of the eleventh day of the eleventh month,” we will offer a two-part worship opportunity at 10:30, with the bell toll in between. 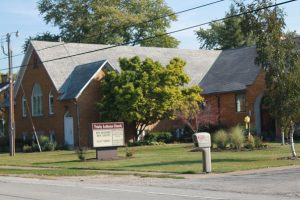 The later service will open with a time of remembrance. Interwoven with Scripture and song will be snippets of the history of the war. Canadian Anthony Hutchcroft has written and performed a marvelous setting for the poem “In Flanders Fields,” having produced a video available on YouTube with dancing choreographed and directed by his wife Lee Kwidzinski. We’ll show the video as part of the war commemoration. Our congregation has also contacted our local American Legion Auxiliary to secure small paper poppies for all who attend.  While in the United States poppies have been more associated with Memorial Day in May, our British and Canadian friends have employed them on and around November 11, which, for them, is called “Remembrance Day.”

Our carillon will offer the sound of a tolling bell for a minute at 11:00 am (done at local time,) joining in a “Bells of Peace” nationwide observance.  See https://www.worldwar1centennial.org/546-events/bell-tolling/bells-of-peace/4558-bells-of-peace-concept.html for more information.

Then, indeed, we will turn to peace, using the texts suggested for “Peace” (Evangelical Lutheran Worship, p. 63). We have ordered copies of “World Peace Prayer” by Marty Haugen and Satish Kumar, intending to include it as either a choral or congregational piece.  Likely the single meditation/sermon will take place in the second half hour.  We will likely close with “This is my song.” (ELW 887). A peal of bell sounds from our carillon would be a fitting conclusion as candles are extinguished.

Additional resources for Veteran’s Day are available from the ELCA website. There will also be an interfaith observance on Sunday, November 11 at 10:00 am, at the Washington National Cathedral.  I’m told that the service will be streamed on the Internet, and will likely be available via recording.

Options are many, but the observance seems worthy of our attention as God’s people, particularly as we lift up the One who is our Prince of Peace, our Lord Jesus Christ.

A Window into Lutheran Summer Music: One Camper’s Story | A View into the “Common Room”: A Story of One Worship Space’s Transformation