(This post originally appeared as “Living Earth Reflection: When Water Becomes No Longer Safe” on the ELCA Advocacy blog. It was written by Rev. Jack Eggleston, Director for Evangelical Mission and Assistant to the Bishop for the Southeast Michigan Synod of the ELCA.  Flint, Michigan, is in the Southeast Michigan synod.) 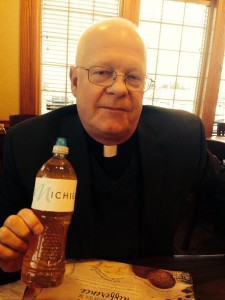 People around me know that I drink a lot of water. Many years ago, Carl, a member of the congregation I served, told me of the health benefits of

drinking water. I drink at least 80 ounces of water a day. When I am tired, a glass of water refreshes my body and renews my energy. Nothing renews like the life-giving water Jesus offers (John 4), but safe water is one of our most basic needs.

Last fall, when refilling my water bottle at Salem Lutheran Church in Flint, Mich., numerous people told me they had concerns about the water and that I should use bottled water. I filled my water bottle from the faucet, but along the road found it discolored and did not taste right. Only later did I learn how dangerous the water is. Flint’s water is unsafe, toxic and a danger to health.

Water pipes are corroded throughout the city, and lead contamination in many homes and at Salem Lutheran Church far exceed safe limits. Lead harms the blood and can damage the brain. After extended exposure, it builds up in organs and bones, remaining years after exposure. All of this contamination could have been prevented. When people complained and physicians reported unsafe levels of lead, the concerns were dismissed. After 18 months, the water is still unsafe for consumption, cooking or even doing the dishes.

Flint is one of the more impoverished cities in America. Local General Motors employment fell from a high of 80,000 in 1978 to under 8,000 in 2010. More than 40 percent of the people of Flint live below the poverty line. The population has declined from a high of 196,000 in 1960 to just under 100,000 today. The city, under an emergency manager, decided to switch water sources and failed to adequately treat the water. The state of Michigan houses nearly one-fifth of the world’s fresh surface water. It is hard to comprehend unsafe water with such great water supplies nearby.

The long unheard cries of people in Flint remind me of the Israelites refusing to drink the water at Marah because it was bitter (Exodus 15). They complained to Moses, and he cried out to the Lord. The Lord and Moses made the water sweet. Every day, the water crisis in Flint touches me more deeply and reminds me that there are many water concerns throughout the world. Global warming is drying up lakes. The Aral Sea, once one of the world’s largest inland seas is mostly desert now, having receded by more than 75 percent in recent decades. Lake Chad in Africa has diminished by nearly 80 percent over the last 30 years due to global warming, reduced rain and water extraction.

After visiting Salem Lutheran Church in Flint, Bishop Donald P. Kreiss and Robin McCants, assistant to the bishop for advocacy and urban ministry, both of the ELCA Southeast Michigan Synod, shared the expanding depths of the crisis with the synod and the ELCA. With some government support

and generous response from the synod, ELCA World Hunger, and people around the ELCA, Salem is now one of the largest distributors of fresh bottled water in the city. Claimed in baptism, refreshed by life-giving water from Jesus that gushes up to eternal life, members of the ELCA are sharing God’s gifts and life-giving water with people in Flint.

Flint will need water for a long time to come. Find out how you can help by visiting the Southeast Michigan Synod website at www.semisynod.com.

Congress is currently considering funding for resources to make the water in Flint safe to drink again. Find out more and take action by visiting the ELCA Advocacy Action Center.

This Sunday when I preach at Salem, I will bring cases of water and two of my own large drinking water bottles. When I return home I will refill them from my faucet and remember the people in Flint. I will be more attentive to ELCA blogs and advocacy requests. Jesus, who gives life-giving water, compels me to do this and to act.