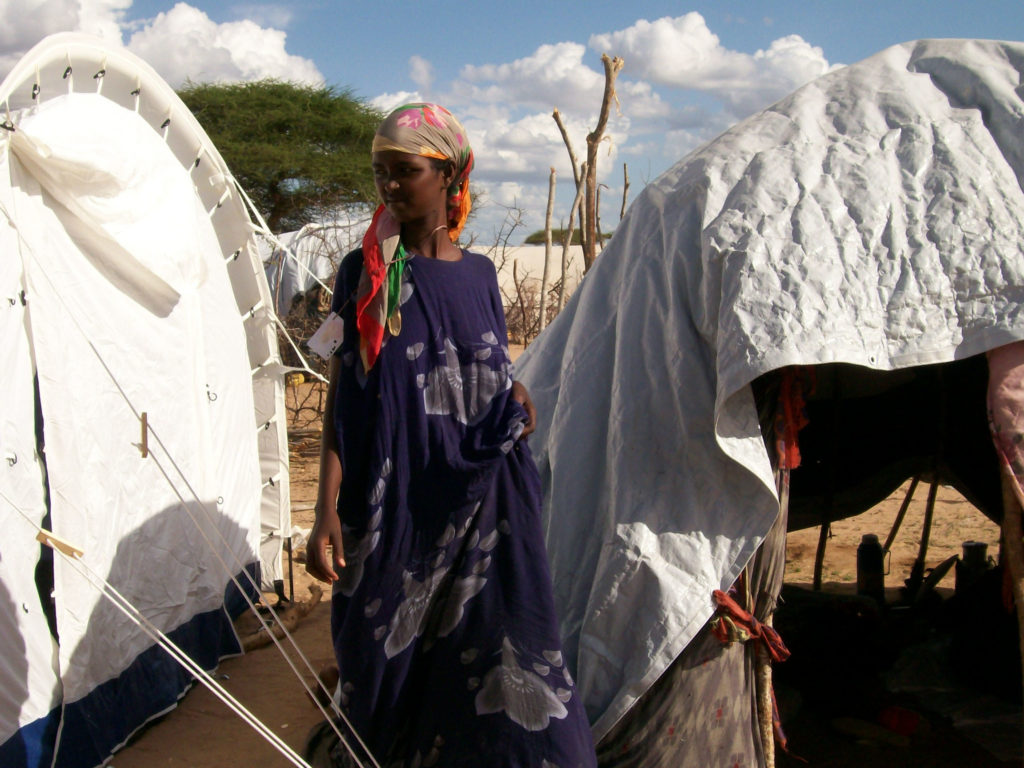 In northeast Kenya, the Lutheran World Federation (LWF) helps manage the largest cluster of refugee camps in the world. At their peak, the Dadaab camps were home to nearly 500,000 people, most of whom are children, women, elderly and people with disabilities who have fled conflict in Somalia, one of the countries included in President Donald Trump’s travel ban. Today, 240,000 refugees remain at the camps, though Dadaab is slated by Kenya for closure later this year. For many young people, the camp is the only home they have known. It is safer than their countries of origin, but like other refugee camps, Dadaab was not meant to be a permanent home.

LWF, with support from members like the Evangelical Lutheran Church in America (ELCA), is working with other agencies to provide sufficient, equitable education, food and health care at the camp, but many residents still struggle to meet their needs. While the care they receive is critical, many refugees still long for a permanent home of their own. Refugees often spend years in Dadaab waiting for resettlement in a new country or repatriation to their country of origin. Resettlement is a lengthy ordeal, with numerous background checks, interviews, and delays. Some refugees at Dadaab have been in the process for up to nine years.

Abroon*, a refugee from the Dagahaley camp in Dadaab, has been working toward his family’s resettlement since 2008. The news of the executive order was a significant blow to his hard work and hope.

“Finally, I had completed all the processes and was waiting for flight confirmation,” he says. “The ban simply means that the United States of America does not want refugees, and I am very demoralized. If someone stops you from going to his house, then you have no option but to go away and look for where you will be accepted and you can belong.”

Shire, a refugee in Kambioos camp, was also disheartened.

“The ban by the USA has just made me make a decision to withdraw my resettlement case,” he says. “It has been a long and tiresome process, but now I concede defeat.”

The President’s executive order for suspension of admission of refugees into the United States sent shockwaves through Dadaab. The immediate effects reverberated around the world as officials struggled to understand the order’s implications for enforcement. But in Dadaab, the effects were not merely confusing but dispiriting. Bashiir, a refugee from Ifo camp in Dadaab remarked,

“I had just finished the whole resettlement process and was only waiting for flight confirmation. Now my case is unknown. After the announcement, I could not sleep and it feels like my dreams and aspirations have been shattered.”

When the executive order was implemented, refugees awaiting travel were sent back to the camps to wait for more information. Because they were planning for resettlement, some had quit their jobs in the camps or sold their possessions to other refugees. Asad, from Ifo camp, had a flight confirmed for January 29, 2017. He notes with frustration,

“I was already in the USA in my mind, and I had finally been able to get this opportunity to belong. When I return to the camp, where do I start from? I had sold and given out all my belongings and even said goodbye to my friends. What does a human being do? I even have the ticket in my hand.”

Culan, a single mother with a disability and three children was also left in a serious lurch.

“I had bought items for my travel and back at the camp I have nothing to go back to but the many problems that exist,” she says.

While some commentators in the United States downplay the significance of the refugee ban because of its intended 120-day duration, those three months put refugees in Dadaab ever-closer to the closing of the camps. For many, it closes one possible avenue away from the violence they fled. Representatives of the LWF note that Somali refugees in Dadaab fear returning to the conflict they once escaped. Dubad, a Somali refugee, had been trained for work in motor vehicle maintenance at Dadaab, with support from LWF. “I passed my exams and even secured a job in Somalia, but due to threats on my life and family problems, I had to return to Kenya to seek refuge,” he says. Being from a minority clan in Somalia leaves Dubad at risk from ethnic violence.

“The announcement has left me hopeless since it feels like every time I seek an opportunity to get better life for me, my family and children, I get a challenge.” Unlike Asad, Dubad had not yet sold his belongings or purchased a plane ticket. But the emotional and psychological cost of Trump’s executive order have been difficult to bear. “My life is still at a threat, and I do hope things get better and that President Trump stops this discrimination and rejection.”

Even those who were not in the process of being resettled are confused and afraid. Lennart Hernander, LWF World Service’s program representative in Kenya-Djibouti, notes that young people were particularly disheartened, losing hope in the resettlement process entirely. Other refugees with family already living in the United States are fearful that their resettled relatives will be deported. These same relatives are often a vital form of assistance, sending remittances to their family back in the camp so they can buy the essentials they need to survive in Dadaab.

The United States, once the source of hope for many refugees seeking resettlement, safety and a new start, has become for some a symbol of exclusion and rejection. Ishaar, a refugee in Hagadera camp and also from a minority clan in Somalia, echoes Dubad’s sentiments:

“I had already been confirmed [for resettlement] and told that my process was successful and to travel on February 28, 2017, to the USA. I thought I was going to be safe, but now the USA has rejected me. Where do I belong since I cannot go back to Somalia for I fear for my life?”

For some, a sliver of hope remains that as borders against resettlement seal and the date to close Dadaab grows closer, new possibilities will be opened by welcoming communities around the globe. But in the wake of the executive order from the United States, the fearful prospect of returning to the places they fought so hard to escape draws closer to reality.

ELCA Presiding Bishop Elizabeth Eaton released a statement yesterday that affirmed the ELCA’s commitment “to continuing ministries of welcome that support and build communities around the country” and to “stand firmly against any policies that result in scaling back the refugee resettlement program.”  Read the full statement here.

*Names have been changed to protect the privacy of the persons quoted in the article. Quotes are courtesy of LWF World Service, Kenya-Djibouti.