“That We May Live Together”: From Challenges to Opportunities

Supported in part by ELCA World Hunger, the Asian Rural Institute (ARI) in Japan is a nine-month service leadership training program that draws people from around the world, allowing them to live and work together as they learn agricultural skills they can take back to their home communities. ARI also invites guest lecturers from Japan and abroad to teach sustainable development, organic farming and more.

Through this model, ARI empowers leaders from around the world to build community, embrace diversity, value rural life, see the dignity of labor, promote food sovereignty and live in harmony with nature. Graduates return to their home countries equipped to work in sustainable development, build relationships with local leaders and transform their communities. Participants also receive ongoing support from ARI in identifying funding and leadership opportunities.

As the impact of COVID-19 began to ripple around the world this spring, countries closed their borders and airports and flights were changed or canceled. Out of 26 students who’d planned to participate in ARI this year, only seven arrived in Japan; the others encountered travel restrictions and other challenges.

Four ARI participants from Sierra Leone were at the closest Japanese consulate — in Accra, Ghana — applying for visas to enter Japan when Sierra Leone closed its borders and the government in Ghana ordered a nationwide lockdown. The participants obtained their Japanese visas, but the airports and borders were closed, so they couldn’t leave the country.

This is when ARI reached out to its graduates in Ghana for help. John Yeboah, a 2018 graduate, answered the call, providing safety, food and lodging for the travelers. He escorted them from Accra to Kumasi by bus and took care of their needs while they awaited travel news.

Modeling what he had experienced during his training in Japan, John even worked with ARI to start the participants’ training right where they were. He led them in morning exercise, time-management techniques, leadership training and coaching, and discussion and reflection sessions.

John Yeboah (second from left), a graduate of the Asian Rural Institute in Japan, is pictured with the four students from Sierra Leone and two local farmers at a pig farm in Kumasi, Ghana.

ARI staff have called John’s work a testament to the impact of the ARI training program on a community. With his display of servant leadership and his ability to adjust in a time of crisis, John turned a challenging and stressful situation into an unexpected time of learning and bonding for the Sierra Leone participants. Despite the difficult year, John and people like him around the world are demonstrating adaptability, ingenuity and Christ’s love for the neighbor.

Because of the work of God bringing people together across borders and through challenges, a farmer from Ghana guided students from Sierra Leone in a training program established by an institute in Japan, with funding from congregations and individuals in the US. Truly, John’s story, made possible in part because of gifts to ELCA World Hunger, reflects ARI’s motto: “That they may live together,” no matter the distances that keep us apart.

This story was originally published in the Winter 2020 edition of Boundless. View the full publication here.

In March 2018, the 62nd session of the United Nations Commission on the Status of Women (CSW62) brought together leaders from around the world. Established in 1946, the CSW is the principal international intergovernmental body dedicated to gender equality and the empowerment of women. The annual session is the largest UN gathering each year. This year, CSW62 focused on rural women and, specifically, two themes:

Priority Theme: Challenges and opportunities in achieving gender equality and the empowerment of rural women and girls; and

Review Theme: Participation in and access of women to the media, and information and communications technologies and their impact on and use as an instrument for the advancement and empowerment of women (agreed conclusions of the forty-seventh session).

Below, guest writer Angela Marie Dejene, president of Dejene Communications, reflects on these themes, her time at CSW62, and the critical importance of narrative – “truth told well.” 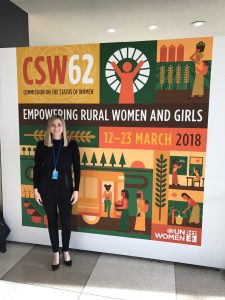 But the stories the media has told, until very recently, have rarely reflected those female narratives and the daily inequalities with which they struggle.

I am the granddaughter of South Dakota farmers, and I grew up on the prairie in Crookston, Minnesota – a farm town of fewer than 8,000 people in the far-away northwest corner of the state.

You knew you were getting close to reaching the edge of town when you started to smell the odor of rotten eggs from the sugar beet plant.

Health complaints from local mothers were ignored – it was and still is a mostly male world in the sugar beet plant and in the fields … and only the local land-grant university had a greater impact on the local economy.

The local newspaper, the Crookston Times, reflected the male-dominated agricultural industry mostly when I was young – and still does today. The front page story last Wednesday featured a meeting of the Mid-Valley Grain cooperative and showed a group shot of male-farmer members.

My grandmother held up “half the sky” on that remote South Dakota farm where my mother grew up and where I spent wonderful summers as a young girl. But where is that female narrative if I don’t find it … if I don’t tell it?

Without truth-telling narratives, there is rarely progress.

But you have to dig deep for that statistic and deeper still for the story behind it. Without narratives, there is no progress.

I was raised by a single mother who worked full-time as a university professor. Still, she had to struggle to make ends meet. I remember going to the local grocery store, HUGOS, on Saturday mornings with my mom and brother, and with my mother’s purse-sized calculator in hand, we would add up the prices of each item we put into the cart. She needed to make sure she had enough in her bank account to get us fed until she got paid the following week.

I always did well in school, and fortunately, those grades and perhaps a compelling narrative in my applications helped me qualify for academic-based scholarships when I started applying for college. With the generous help of those scholarships, I enrolled in Augustana University, an extraordinary liberal arts university affiliated with my Lutheran faith, located in Sioux Falls, South Dakota. At Augustana, I double-majored in journalism and government/international affairs and served as an editor for the school newspaper.

I’ve always had a passion for uncovering and telling true stories. When women are in charge of the narrative, policies change, communities are empowered and the lives of women and girls are transformed. I started my career as an unpaid lobbying intern in Washington, DC, advocating for health care policies that would improve the lives of women and children. I spent most of my time on Capitol Hill finding and sharing the true stories of how the U.S. healthcare system at the time was failing women, families and children.

These were stories that reported on real families, some forced into bankruptcy because a mother, a wife, or a sister was diagnosed with breast cancer and their health insurance policy had a “lifetime limit” on how much of the treatment would be covered.

These were stories of real families who relied on the Children’s Health Insurance Program for their children’s critical visits to the doctor to manage a chronic condition like asthma or Type 1 diabetes.

These were stories of real high school girls who were experiencing teen dating violence but had nowhere to turn because the local legal system had failed them.

The re-authorization of the Violence Against Women Act was signed into law on March 7, 2013. The new law made targeted expansions to address the needs of especially vulnerable populations and help prevent violence in future generations.

The Affordable Care Act was signed into law on March 23, 2010, giving millions of families new-found hope and access to affordable, high-quality health care.

Stories of horror and struggle.

Stories of compassion and empowerment.

Stories of survival and success.

If we strive to find and to communicate, if we work to broadcast the truth about women from and to even the most remote of places – we fuel and ignite progress everywhere.

Narrative – truth told well – by women and about women – can advance and empower the lives of all who live on this planet.