To run a country, a seat of government has to have a permanent address.

Back in 1862, a flood transformed Sacramento into what papers called “a sort of a frontier Venice.” Early in January, said reporters, “Water in Sacramento was at such a depth that no one attempted to move about the city except by boat.” Governor Leland Stanford arrived at his inauguration in a rowboat. Ten days later, the State Treasurer’s office was under three feet of water, and “a piano in the parlor of the Chief Justice, though perched upon chairs, was soaked, and the pictures in the parlor were spoiled.”

On January 24, 1862, the government packed up and moved to San Francisco to finish out the legislature’s session. In the fall, everyone got back to work in a dried-out Sacramento, which has been the capital city ever since.

I’m not sure if Gov. Schwarzenegger has a flood contingency plan, but other governments are getting ready! Last month, the Prime Minister and cabinet of the Maldives donned scuba gear and met underwater. This month, Nepal’s cabinet will meet at the Mt. Everest base camp. Both governments are taking to the road to emphasize the perils they face from flooding caused by global warming—the Maldives, by sinking under the sea; Nepal, by melting glaciers.

These people are seriously worried. Me, too. While northern California’s reservoirs are dangerously low, Sacramento—still at sea level, still surrounded by levees, though they’ve gotten sturdier since 1862—is as vulnerable as New Orleans. After Hurricane Katrina, my nephew asked my parents to put an ax in a second-floor closet so they could chop through their roof if they had to. If hundred-year rains and an early snow melt inundate Sacramento and send my parents to their roof, where will they send California’s government?

It’s astonishing to hear that the number of people who think that global warming is caused by humans is declining. Even though humans—and mostly humans living in North America—generate about 4 billion more tons of greenhouse gases than the earth can absorb! I’m hoping the big climate change conference happening in Copenhagen in December will turn that trend around.

Meanwhile, I’ll ride my bike, take the bus, and get that ax upstairs. 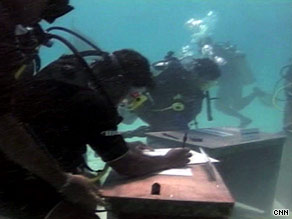 The cabinet of Maldives meets underwater