Reflections on the 2017 U.S. Conference on AIDS

December 1 is World AIDS Day, an important time to learn, advocate, and pray. It is a time to celebrate how far we have come in the fight against HIV and AIDS – and how far we have yet to go.

This September, six ELCA Young Adult delegates, supported by ELCA World Hunger and Lutheran Campus Ministries, attended the United States Conference on AIDS (USCA) in Washington, DC. The USCA is a key event for activists, medical professionals, non-profits organizations and others to learn about the latest challenges and opportunities in the fight against HIV and AIDS. ELCA delegates heard from leaders in a variety of fields and engaged in conversations around connections with their faith. Below, Yen Tran and Richard Adkins, attendees at this year’s conference, share their reflections on the event. 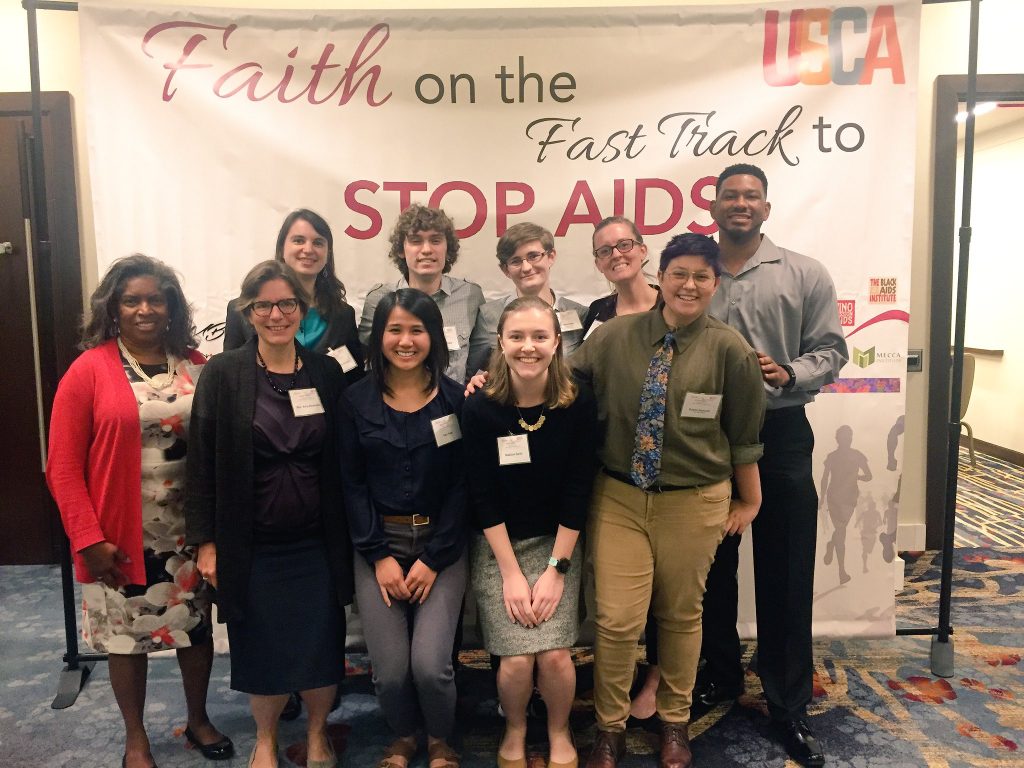 ELCA staff and delegates at the United States Conference on AIDS

Richard Adkins – “The stigma is real”

Richard Adkins has over 10 years experience involved in HIV and AIDS. He has led numerous workshops around stigma reduction. He has been a member of the ELCA’s Young Adult cohort, an ambassador for ELCA World Hunger, and a youth delegate for the 2014 International Aids Conference.

One of the most dangerous obstacles in the fight against HIV and AIDS is stigma.  Yes stigma. The medical treatment of the disease has come a long way and HIV is no longer the death sentence it was in the early 1980s. In fact, the United States Centers for Disease Control and Prevention (CDC) recently agreed with the science from the U = U campaign, that if a person is on treatment and virally suppressed, they cannot transmit the virus. The medical community has provided the knowledge and treatment to keep people alive and reduce the spread of HIV.

Despite these medical advances, the rate of annual infections only decreased 10% in 2014.  What is the reason? Stigma.

Stigma is a mark of disgrace associated with a particular circumstance, quality, or persons. The stigma surrounding HIV is unique in that part of it comes from the history. In the early 1980s and 1990s, people were dying, little could be done, and little information was known about the disease. The stigma also comes from how it’s transmitted, through injection drug use and through bodily fluids exchange through sex, both highly taboo subjects. The population that HIV disproportionally affects are gay males and people of color, so HIV is further stigmatized through homophobia and racism. There is an intersectionality of stigma experienced that can be made worse by race, class, sexual orientation, gender identity and/or other factors.

The cycle of stigma is a vicious one that can reinforce negative beliefs and behavior. HIV stigma leads to discrimination, which can affect the ability of people living with HIV to find work or housing, which in turns contribute to a lower self-esteem. This can even cause a person to avoid doctor’s appointments, which leads to poorer health outcomes and more stigma. The stigma is then reinforced through negative or false beliefs or even stigma from enacted laws. The end result of stigma is that fewer people get tested, and those living with the virus live in secrecy and silence.

If stigma feeds on shame and isolation, the key to overcoming stigma, is community and understanding.  It starts with information, knowing how the virus is transmitted and how it is not. The next step is acknowledging HIV. The United States currently ranks 9th for most people living with HIV at 1.1 million people. These are people in our communities, in the same neighborhoods, attending our faith communities, the same schools. They are often in the shadows for fear of not being accepted and of facing discrimination. Ending stigma means seeing people for more than their status, and creating a safe and welcoming environment for all.

Yen Tran is a Public Health Professional. She implements sustainable practices and promotes healthy living environments for the St. Paul Public Housing Agency in Minnesota. She enjoys collaborating with diverse populations, who have a common mission to flourishing equitable communities. Yen resides in Wisconsin with her partner, who is an ELCA Pastor for North Beaver Creek Church.

This upbeat, make-you-want-to-groove song by Sister Sledge, was played continually throughout the U.S. Conference on AIDS. Community members from across the country have united for more than two decades now at these important events. The annual frequency has transformed the gathering into something like a “family reunion.” A time to catch up with familiar faces, welcome new arrivals, to share and listen to numerous stories of triumphs, challenges, and hopes, and to be re-energized in the mission to end to this HIV and AIDS epidemic.

Reunions of any sorts always stir a spectrum of emotions. Whether it’s feeling excited to reconnect with distant friends or feeling dreadful to encounter new faces or re-encounter a particular person who drove you to the edge. During the reunion, I experienced both ends of the spectrum. I felt nervous, excited, amazed, saddened, disappointed, hopeful, empowered, and many times, hangry when I didn’t get a snack in between the workshops. However, at the end of this particular reunion, I felt overwhelmed with love and filled with inspiration.

As a Midwestern, first-generation, Asian-American, Catholic, cisgender, ‘negative-status’ person, I was welcomed open-armed into this diverse family. I felt privileged to be trusted and to hear personal struggles of how the social, environmental, and political systems have hurt or failed to protect the most vulnerable populations. I saw how various determinants of health, such as education, economic stability, society, access to health care, and the physical environment, have tremendously impacted a persons’ mental and physical well-being. Though there were many lessons I learned from the stories shared, but these three facts have blown me away:

Overall, the conference created a sanctuary, an environment that was inclusive and encouraged all voices to be heard. A community where I felt so at home. It would be wishful thinking that all communities – schools, workplaces, spiritual centers, healthcare clinics, public centers, etc. – can be just as inviting and supportive. I know not every community (and not every families) may have similar priorities, support systems, resources, values, and policies that may promote such environments.

However, we are equipped to learn open-mindedly, to love unconditionally and to listen humbly to diverse perspectives. We can set aside our differences or claimed identities and realize that we are not perfect human beings. We do wish to do good, to be valued and for our voices to be heard. Most importantly, we have the ability to unite as a family and to uplift each other.

The missions to end epidemics, stigmas, and inequities are attainable:

Here’s what we call our golden rule

Have faith in you and the things you do

This is our family jewel…. 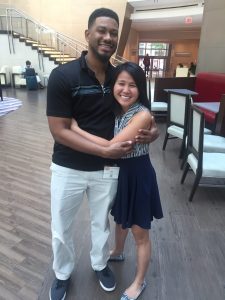 Yen and Richard at USCA