Of Community and Courage: Responding to Public Charge Rule as a Sanctuary Church

Last week, the ELCA Churchwide Assembly took action be a “sanctuary denomination” – publicly declaring our intent to walk alongside immigrants and refugees as a matter of faith. In response to this action, a well-used question of Martin Luther again began to surface – “what does this mean?” 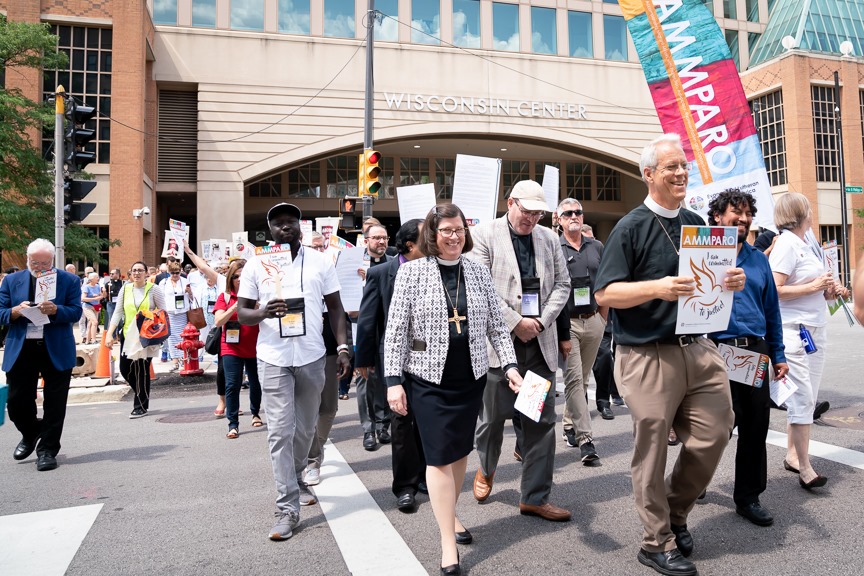 And yet, just as voting members were returning home and news of this action was traveling far and wide, another announcement also hit the news cycle — a final rule that changes the public charge policies used to determine eligibility for people seeking to immigrate to the United States or to change a current immigration status.

While the rule itself has many nuances and implications laid out in the 800-page document, the question again becomes – “what does this mean?”

One of the most immediate consequences may be a sharp drop in the number of people applying for and receiving benefits like Section 8 housing assistance and SNAP. SNAP is one of the most reliable federal safety net programs for helping people facing food insecurity get through tough economic situations. About 11.7 percent of people in the US rely on SNAP, according to the US Census Bureau. Contrary to rhetoric that suggests people receiving public assistance don’t work, about 79 percent of households receiving SNAP in 2017 had at least one person working in the year they received benefits. By contrast, of the households which did not receive SNAP in 2017, about 86.1 percent had at least one worker. The difference is far from huge. Often, households rely on SNAP to supplemental insufficient income or to pay for food when there is no work, such as during seasonal down-times.

In terms of citizenship status, in 2017, 11.2 percent of native-born US citizens relied on SNAP, while 17.1 percent of foreign-born non-citizens received SNAP. It’s important to remember that undocumented immigrants are not eligible for SNAP benefits, and most documented non-citizens working in the US pay taxes that fund SNAP. According to the USDA, in general, non-citizens must meet one or more of the following criteria to be eligible for SNAP (in addition to meeting limits for income): have lived in the country for at least 5 years, be receiving disability-related assistance, or be under the age of 18.

The decrease of SNAP participation is likely to leave food insecure families relying more heavily on community resources, like food pantries, to help meet their needs. But as most folks working in hunger-related ministries know, community responses to hunger cannot match the capacity of governmental responses. So, another likely result is an increase in hunger in communities across the US.

In defense of the rule change, Ken Cuccinelli, acting director of US Citizenship and Immigration Services, took the opportunity to revise Emma Lazarus’ famous poem etched on the Statue of Liberty. In his rendition, “The New Colossus” reads: “Give me your tired and your poor who can stand on their own two feet and who will not become a public charge…” Self-sufficiency, he claimed, should be a litmus test for welcome.

On its surface, self-sufficiency may seem like a worthy ideal. After all, a lot of anti-hunger and anti-poverty organizations doing great work celebrate the steps they help people make toward self-sufficiency.

For the church, though, it is a matter of faith that we are not self-sufficient. One of the most basic tenets of Christian faith is that humans are created as dependent creatures. We depend on God for our creation and sustenance, on one another to meet our basic needs, and on grace for our salvation. We are created to be in community with each other and with God in part because we are not self-sufficient. Our well-being depends on the health of these relationships.

To be a sanctuary church means recognizing the reality of our interdependence. But it also goes a step further. To be a sanctuary church is to offer a different model of community, one in which welcome is extended to all and one in which our vulnerabilities and dependencies are laid bare. The social ethic the church offers is not merely its public voice but its very self – a community where blessings and burdens are shared.

Providing public benefits is one way well-being is safeguarded in the US. SNAP benefits, for example, ensure that families have the means to obtain the food they need during hard times. Housing assistance equips people facing financial challenges to live in a safe, stable home. Health care programs like Medicare and Medicaid ensure that the most vulnerable neighbors among us will have access to the services they need to survive. And yet, these same programs are the targets of the new DHS rule. Accessing any of these may mean that a non-citizen in the US will be deemed a liability and barred from full participation in the community.

For many people, the prospect of this new rule is frightening. How can one choose between the help they need now and the legal status they may hope for in the future?

Government is no stranger to fear. Indeed, fear is, to some extent, part of the role of government. Paul’s letter to the Romans, so often tossed about as justification for obedience to government, admonishes that “rulers are not a terror to good conduct, but to bad” (Romans 13:3a). But what happens when rulers become a “terror” to all? Several ELCA pastors and leaders have noted the fear that plagues the people in their communities – fear that a visa may be denied or that an application to stay in the US will be rejected.

We need to bear in mind here that this new rule does not impact undocumented immigrants, who are ineligible for the benefits listed in it. This rule will directly affect the millions of non-citizen individuals and families who are trying to do things “right” but need help along the way.

What Can Be Done

State attorneys general have already begun the process of challenging the rule change in court, and there may be opportunities for advocacy in the weeks to come. Until then, here are some steps to take now.

Reach out to local ministries.

Local food pantries and feeding programs are a critical response to hunger in the US, though their capacity cannot match the need addressed through programs like SNAP. As the new rule is implemented, it is likely that many immigrant neighbors will forego SNAP benefits and need to rely more heavily on community interventions like pantries and soup kitchens. Reach out to local ministries to learn more about their needs and ways you can support them.

Effective responses to hunger start with meaningful, mutual relationships. The rule change, recent enforcement decisions by the federal government and public rhetoric have fostered fear and uncertainty. Take time to listen to neighbors and let them know our church supports them. Try to identify needs that can be addressed in the short-term as we work together for long-term change.

If you are the leader of a community ministry, you may have clients who will be impacted by the new rule. It will be important to provide them with accurate, up-to-date information as the date for implementing the rule (October 15) gets closer. Consider developing handouts or posters that communicate information they may need to know. If your ministry involves caseworkers, be sure that they are equipped to handle questions about the rule. The National WIC Association has some helpful resources for clients and staff of community programs. (WIC is not one of the benefits included in the new rule.) The Protecting Immigrant Families Campaign also has some helpful resources, including newly updated pdfs on the public charge rule.

Much of the work to respond to this upcoming change has already been done – through the building of meaningful relationships with neighbors in our communities. But much more work awaits. In this time, we are called to bear witness to a new type of community – a banquet at which all are welcome. As a sanctuary church, the ELCA is committed to continue accompaniment of neighbors facing adversity, uncertainty and fear. This is lived out through local congregations and the ministry they do every day. Yet still, we must continually remind ourselves that hospitality is not an issue of partisan politics but of faith in the God who transcends all “principalities and powers.” To be a sanctuary church is to enter in to the vulnerabilities of our neighbors as if they were our own and to bear witness to the interdependence with which God has created the world and the diversity with which God has blessed it.