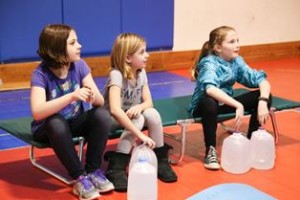 his time of year we see seasons changing with the last bit of winter frost fading to the warm air of spring. The seasons of the church change as well from the somber time of Lent into the celebration of Easter. During the season of Lent Messiah Lutheran Church in Vancouver, Washington, decided to spend their weeks not only in worship, but educating their congregation about water.

“Stay Thirsty” was the name of the Wednesday evening sermon series for the season of Lent and each Sunday there was a children’s message about water. In the midst of abundance, Messiah Lutheran Church decided to talk about scarcity of a resource that we all depend on: clean water. 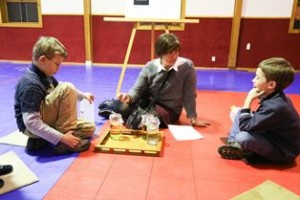 The first “Stay Thirsty” evening, the congregation put on their own Walk for Water. They set up three tracks going throughout the church with stops along the way to learn about waterborne diseases and the reality of water all around the world.

Each track lets you walk in the shoes of a real story, and simulate the difficulties of not having accessible water.

At Messiah there were a large number of people who wanted to participate, so the congregation provided various sizes of water containers to accommodate the inter-generational walk with participants as young as three. 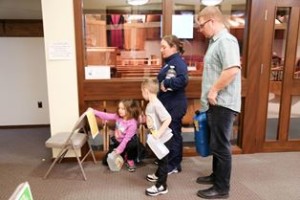 This first event provided a way for the whole congregation to get acquainted with the theme of “Water for the World”, and learn more about what the ELCA is doing around the world.

As a retired teacher, Hope Quinn took on the responsibility for writing and delivering the children’s messages each Sunday. Each week provided a different lesson on water, and a box for collecting coins to contribute to ELCA World Hunger’s water programs. “Water for the World” was the theme that was adopted and a wishing well was placed in the narthex to collect prayers of the congregation on a clothesline with a thermometer to gauge how much money they raised.

The first Sunday the theme was introduced with a simple question to the children, “When you want a drink of water at home, what do you do?”. The answer would be the same for many of us, that we simply go to our sinks and turn on the faucet. There might be a water filter involved, but nothing strenuous. Answers from the children prompted a conversation on how many people in the world do not have this same luxury, with an illustration from the Walk for Water video. The children were given coin boxes to collect money during the week and told about how their coins can help give people safe water to drink. 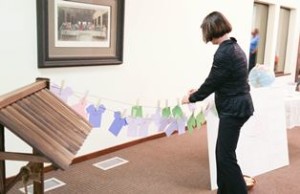 Wells were the next topic, and understanding what kind of well water is actually safe to drink. Quinn pointed out that well water can contain debris and other materials to make the water unsafe to drink. Porterville, California, is an area that relies on wells to provide water but due to drought their wells are running dry. Quinn lifted up that ELCA World Hunger is helping provide materials to aid the people of Porterville, which is only a two-day drive from Vancouver. After this children’s message many adults came up to Quinn saying that they had no idea that ELCA World Hunger worked domestically! 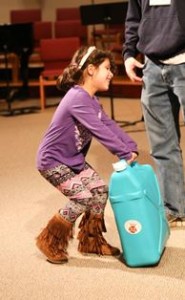 Women are usually the ones faced with the burden of gathering water for their families, and that was illustrated in the third week of Lent. Quinn asked for two girls to volunteer from the group to carry an empty bucket and an empty jug. The volunteers illustrated how difficult it is to carry the bucket instead of the jug and learned that with only two dollars from their Water for the World boxes they could buy one of the jugs! Also with only one dollar from their boxes they could provide 140 water purification tablets! The last Sunday showed what happens when an area gets clean water. Quinn showed a PowerPoint that illustrated the different components to getting clean water and what it meant for a community in India to gain access to clean water with the support of ELCA World Hunger.

Messiah wanted to show through education and giving that we really can make a difference by coming together as sisters and brothers in Christ. This congregation took a season to learn about the ELCA in the world, and at the end of their time they raised nearly $2,500! 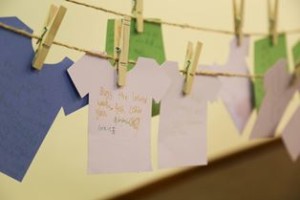 Let us take a season, a Sunday, or just a moment to bear witness to what we as a church can do in the world, and how something as simple as clean water can make all the difference.