How I Learned to Stop Worrying and Like Matthew 25

This is probably going to sound odd coming from someone who works for an anti-hunger ministry, but I cringe nearly every time someone cites Matthew 25. It’s impossible to avoid, much as I try. It isn’t that I have anything against the author of the Gospel (though, really, isn’t Mark more exciting?) But the chapter is cited uncritically so often that it becomes tedious, like the cloying relative who corners you at every holiday, leaving you searching for distractions anywhere and everywhere. Yet, in the last month, I have heard not one but two presenters draw on this troublesome chapter and, through their words, force me to re-think my distaste for it.

Some of the problems with the passage are intrinsic to the words themselves. “The least of these”? Really? We should feed people who hunger, clothe people who are naked, give drink to those who thirst and fellowship to those ill or imprisoned because they are “the least”? The “least” what? The least deserving? The least important? The least powerful? No one in their right mind wants to be considered “the least of these.”

Then, there’s the whole problem of whom Jesus is talking about. Most often, modern uses of Matthew 25 seem to imply that “the least of these” includes anyone in need (or, anyone who might be considered “least” by any measurable standard, however idiosyncratic it might be.) But there are some reasons to believe that Jesus didn’t mean “anyone in need” here. Many biblical scholars point out similarities between Matthew 25 and Matthew 10, noting that Jesus may be referring here to how people are to treat his disciples. So, this passage might have more to do with how we are to treat followers of Jesus than it is about how we are to treat neighbors who are hungry, thirsty, naked or imprisoned. (Or, it might not. That’s how biblical interpretation rolls.)

Still, even these are not the things that trouble me the most when I hear Matthew 25, especially among Lutherans. The biggest problem I have is how quickly we turn from the gospel message of grace back to the law. Matthew 25 is too often set up as a legalistic charter for determining who gets saved and who doesn’t.

The passage itself seems to set this up – you’re either a sheep or a goat. And as the old children’s song goes, “I don’t wanna be a goat – nope…I just wanna be a sheep – baa.” 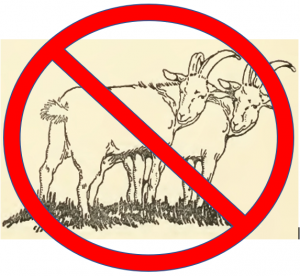 The goats are destined for afterlife apart from God, while the sheep will enjoy eternal fellowship with the Savior and Creator. Which side we’re on will be determined, it seems, by how or whether we do the stuff Matthew’s Jesus tells us to. How quickly we slide from saying that the Christ event reveals God’s grace to us, who have been convicted by the Law and freed by gift, to saying that there still exists a litmus test of obedience that determines our salvation.

We don’t get to have it both ways. We don’t get to say we are saved by grace and then say that if we don’t act in a certain way, we won’t be saved. It doesn’t work like that.

But does that mean that none of the works listed in Matthew 25 matter? Of course not. Jesus is clear that as we encounter the neighbor in need, we are encountering the Christ. There is something here about how we see the face of God, how we serve God, how we participate in God’s being in the world. And that’s worth paying attention to, though maybe not in the ways we have paid attention to it in the past.

Being saved by grace, as Martin Luther made clear, doesn’t free us from works but from false ideas about works, namely the false idea that works can save us. Too often, we lose sight of this when it comes to Matthew 25, and we start tossing it around as a new law. But it isn’t a new law or to-do list for the anti-goat crowd. Matthew 25 is not a Carnegie seminar for getting into Heaven. It’s a treasure map for finding God. If we are to stay true to the message of the gospel, indeed, the message of all of Scripture, the key is that God is to be found in places of need and among people in need. Maybe “least” here means “least expected.” 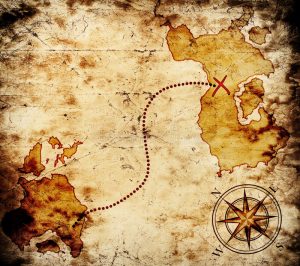 “Well, I’ll be! God’s right there in that neighbor.”

Grace impels us to seek God in our midst. St. Augustine characterized love as the pursuit of the object of our love. We pursue what we love. The beloved draws the lover to it. Love of God means being drawn to God – and to all that God loves. We moderns then ask the question, “How can we love what we cannot see?” Matthew’s answer is rather straightforward: you can see God! You see God every time you see your neighbor, especially when you see your neighbor in need. In a strange parallel to the preteen Jesus, I imagine the resurrected Christ saying in exasperation, “Didn’t you know I would be out on my Father’s streets?”  Where else would we find the crucified God than among the “crucified people”?

Seen this way, the passage makes much more sense to me. It stops being about whether we’re sheep or goats, or whether we’re “least” or “more.” Those kinds of hierarchies make it difficult to envision ministry as mutual. It also makes it difficult to encourage authentic service of our neighbors that goes beyond begrudging obedience. But if we start with grace and then do our interpretation, there is so much more to be gained. (Ain’t that always the truth?) Grace changes our service from begrudging acceptance of a task to joyful embrace of a mission. It transforms the neighbor, too – from a tool for our own salvation to a complex reflection of Emmanuel (literally, “God with us.”)

If we read Matthew’s chapter through a lens of grace and allow it to shape ministry in such a way that we see our neighbors as visible manifestations of the living God, maybe there’s hope for this passage yet. And maybe there’s hope for us, as we learn ever-deeper ways to live out our faith in an increasingly needy world.