Ramoni Rani and her husband, Nor Uttam Hawlader, live in the village of Rajakhali in Bangladesh with their two sons. Like many Bangladeshi farmers, Ramoni and Nor use wood-burning stoves to cook food in their homes. The cost for fuel for the stoves can be very high for families with limited incomes, around 4,000-4,500 takas (about $50-57 per month). Wood-burning cookstoves also produce a lot of smoke, a key culprit in many health problems. In fact, a 2009 profile of Bangladesh from the World Health Organization found that indoor air pollution contributes to nearly 50,000 deaths every year. Ramoni, Nor and their children suffered from respiratory illnesses and eye problems because of the smoke in their homes. 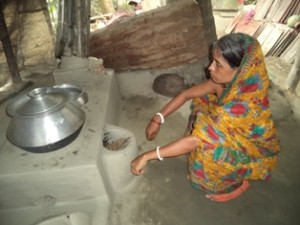 By giving women in the Dumki Upazilla region of Bangladesh the improved cookstoves and offering training in using them, Lutheran Health Care Bangladesh helped many women provide a safer, cleaner and more affordable way to cook for their families. Ramoni and Nor, who participated in the program, found that the new stoves cut their costs and the time they spent cooking in half. Now the health problems they and their sons had are all but gone, and Ramoni and Nor can spend the extra money on taking care of their children.

The use of more efficient cookstoves is also a step toward better care of creation in Bangladesh.  According to a 2009 report from the Food and Agriculture Organization of the United Nations, nearly 2,000 hectares of forest are lost in the country every year. This results in a “serious imbalance in the environment of Bangladesh,” according to representatives of Lutheran Health Care Bangladesh. This makes the increased use of improved cookstoves – and the country’s growing emphasis on planting trees – even more important.

By providing clean, efficient cookstoves to Ramoni, Nor and more than 250 other people, Lutheran Health Care Bangladesh is meeting the significant goals of its program. Slowing the deforestation of rural Bangladesh, improving the air quality in homes, and freeing time and money for other activities are made possible in part because of gifts to ELCA World Hunger. This sustainable solution to deforestation, indoor air pollution, and high costs for fuel is an innovative way Lutheran Health Care Bangladesh is making an impact, while demonstrating how care of creation can make good economic sense for families.