These reflections are a part of ELCA World Hunger’s Sermon Starter series which is published via email every Monday. You can sign up for the weekly email here on the right side of the page. Pastor Tim Brown is the writer of these reflections. Pr. Tim is a Gifts Officer and Mission Ambassador for the Lutheran School of Theology at Chicago and a pastor and writer out of Raleigh, NC. You are invited to use the Christmas messages below for personal devotion as well as prompts for sermon writing.

My favorite Nativity scene is sitting on our end table in our living room.

It’s made out of olive wood and the pieces don’t move.  Well, except for one.

That is because it’s a depiction of the stable, Mary, Joseph, baby Jesus in a manger, some shepherds, livestock scattered round and then there are the Magi traveling to see them. And in between the stable scene and the Magi is a huge wall.

It’s like a fence, but solid, and it’s smack dab in the middle of the manger scene. 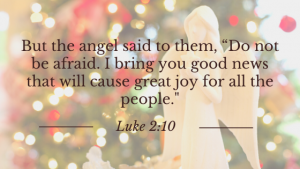 visit Bethlehem: they’d encounter the great wall in Israel that holds Palestine penned in on all sides.

But that wall means other things, too.

It’s indicative of this long spoken-of wall to be built on the southern border of the United States.

It’s indicative of all of the walls that are put up around your dinner table at your holiday gathering between family members who can’t speak to one another due to politics, old wounds, new wounds, perceived slights, real slights…we have many walls.

It’s indicative of all of the walls that the people in your assembly on this Christmas Eve have put up, or have had put up in front of them, which is why they only show up twice a year at best. The church is excellent at building walls, Beloved.

And it’s indicative of the walls of checkbooks we’ve set between us and those experiencing poverty around the world, choosing to send money rather than build relationships. Money is good and necessary; please don’t get me wrong. But relationships change minds and hearts.  And if we’re going to be a world that stops building walls between people, we need to be about building relationships.

In fact, one of the big walls that you, preacher, will have to hurdle on this Christmas Eve is the huge wall of familiarity that most in your pews have with this text!  How do you preach on the same text every year and pull something new from it?

Well, maybe we don’t have to pull something new from it, but, rather, just let it do its thing.

Because God showing up in the person of Jesus is a sign that God is not about walls, but relationships. And God will traverse the cosmos over space, time, and reality to prove it.

I mentioned that, in this Nativity set, there’s only one piece that moves…and it’s the wall.  You can pull it out and set it aside.

Because although we have put up all sorts of walls in our world, real and figurative, God is about breaking down such walls between us, between all creation and between the human and the Divine.

If, on Christmas Eve, you leaned into the entirety of the Gospel lesson for this festival duo, which I think you should because the majority of the people will only hear the Christmas Eve service, then Christmas Day is the perfect opportunity to do two important things: preach a shorter sermon and focus on the obscure offering from Titus that the Epistle gives us.

Because Titus, a small and largely underutilized Epistle that is shrouded in mystery, gives us a wonderful distillation of Lutheran theology on this Christmas Day.

This day, Christmas Day, is a day to highlight the oppositional nature of this whole Divine experiment that we call the Incarnation.

Human and Divine are opposites, and yet on Christmas, they are fused as one.

We have been trained by society to believe that rewards are given by merit, and yet on Christmas, and in this Titus reading, we 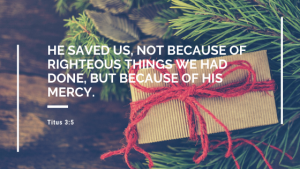 are reassured that the gift of salvific love is not something we’ve earned but rather something just freely given.

We have been trained by our world to live off our instincts, instincts which are largely driven by fear.  It’s our evolutionary heritage.  And yet, we learn at Christmas that faith is the opposite of fear and that we need not think the shadows will overtake us because the light of the world is born to us on this day.

We have been trained by our laws that only those who are deserving receive an inheritance. And yet, on Christmas Day we hear that the inheritance of God is ours to have not because we deserved it but because we are so richly loved.

It all sounds so impossible.

As impossible as a baby saving the world.

As impossible as God showing up through the womb of an unwed mother.

As impossible as a tree growing in living rooms.

It is especially true that, at Christmas, we can conceive of a world where ELCA World Hunger would not be necessary. We have been taught by the world that there are “haves” and “have nots.” But in the promises and living example of a Christ who doled out healing with reckless abandon, who ate with those who couldn’t find a table in reputable society and included those who the world purposefully excluded, we’re invited to believe that just as we’re given God’s grace so freely, we can be agents of that free grace for a world in desperate need of it still today.