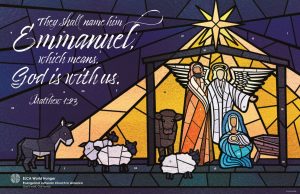 From Good New to Bad News

“He shall not judge by what his eyes see, or decide by what his ears hear; but with righteousness, he shall judge the poor, and decide with equity for the meek of the earth” (Isaiah 11:3b-4a).

In many rural villages in Guatemala, families tend to be large, and due to poverty, cultural traditions and other factors, daughters are often given away for marriage early. At 12 to 14 years old, girls are matched with husbands who are at least twice their age and sometimes older. Pastor Karen Castillo of the Augustinian Lutheran Church of Guatemala (ILAG) knows many of the girls’ stories well. Pr. Castillo hears their frequent concerns about the lack of educational opportunities that can change the future for girls and women throughout Guatemala. Schools are often far from people’s homes, and if instruction is available, boys are often given precedence. When girls are excluded from continuing their education, they are also excluded from new opportunities, including the opportunity to make many decisions about their futures.

Holy Scripture assures us that God hears their stories, too. The promise of Isaiah, indeed the promise of many of the writings in the Old Testament, is that God has heard the people’s pleas for liberation and salvation and will deliver them (Exodus 3:7-8). God’s intimacy with the people of God is such that God is attuned to the many obstacles that undermine the people’s well-being. God’s anger is revealed most clearly in those places where injustice and inequity reign – and God’s loving concern is revealed equally clearly when the children of God are blocked from enjoying life abundantly.

In the Gospel of Matthew, John the Baptist echoes this anger when he sees a group of Pharisees and Sadducees gathered among those desiring baptism. “You brood of vipers!” he calls out. “Who warned you to flee from the wrath to come?” (Matthew 3:7). John is not the meekest character in the Gospel, but here, he’s about to get medieval before there was a medieval to be gotten. What was it that so incensed the Baptizer? We get a clue about the fault of the Pharisees and Sadducees later in Matthew, when Jesus denounces both groups: “They tie up heavy burdens, hard to bear, and lay them on the shoulders of others … they love to have the place of honor at banquets … [they] lock people out of the kingdom of heaven … [they make] gold sacred … [they] have neglected the weightier matters of the law: justice and mercy and faith,” and so on (23:4-23).

The Pharisees often get a bad rap in the Gospels. They serve as foils for Jesus and the disciples so often that the reader might think “brood of vipers” is John the Baptist’s way of going easy on them. In reality, the Pharisees were one of several Jewish groups at the time and, in some ways, weren’t quite as bad as they might seem. They understood the life of faith as a life focused on obedience to the Law, so they rigorously held themselves to its high standards. The problem was, they held others to those standards, too, even when the Law seemed unclear or when the literal, traditional punishments for violations were downright deadly. For the Pharisees, being faithful meant obeying the Law and tradition, no matter what the consequences were.

Jesus’ teachings in the Gospels present a different understanding of faith. For Jesus and his followers, a relationship with God is not meant to be a burden. In fact, quite the opposite: “For my yoke is easy, and my burden is light” (Matthew 11:30). Isaiah, whom John the Baptist quotes in Matthew, describes what true righteousness looks like for God’s people: justice and equity, particularly for “the poor [and] the meek,” those without the social or economic status to demand these things for themselves.

As God draws near through the One prophesied by Isaiah and John the Baptist, the bad news of exclusion is transformed into the good news of hospitality, and the bad news of judgment is transformed into the good news of justice — for them and for the community. It is from among these people, whose lives are so circumscribed by legalism, tradition and inequity, that Jesus will draw both followers and leaders.

In Guatemala, where poverty, traditions and sexism prevent communities from benefiting from the gifts and skills of girls, the ILAG is helping provide new opportunities. Opened in 2018 at the Augustinian Lutheran Center in Guatemala City, the MILAGRO (“miracle”) Women’s Education Center is a place for young women from these rural communities to continue their secondary education, faith formation and development of vocational and life skills that will help them be financially independent in the future. With support from ELCA World Hunger and ILAG, the young women at MILAGRO Women’s Education Center are part of the work God is doing in their communities, proclaiming the good news of justice, equity and life abundant for all.

Pastor Tim Brown is the writer of this Advent children’s message. Pr. Tim is a Gifts Officer and Mission Ambassador for the Lutheran School of Theology at Chicago and a pastor and writer out of Raleigh, NC. This Advent Children’s Message is cross-posted from ELCA World Hunger Sermon Starters.

The season’s texts provide the leader with an opportunity to practice Advent anticipation, and each children’s message with grow week-to-week until Christmas Eve/Christmas Day.

Bring in a large wrapped box. Inside the box make sure to include two smaller boxes, one inside the other, like nesting dolls.

Inside the smallest box put a pocket mirror. Draw a large yellow star on the outside of this smallest box.  Inside the second-largest box put the smallest box along with a bunch of new Band-Aids and draw a large red cross on it like an emergency first aid kit. And inside the largest box, put the other boxes along with a bunch of stickers. On the outside of this larger box, put a picture of a stump with a stem springing forth. On the tree you’ll write the riddle below. Invite the children to come forward.

“Look here, folks, I have this box here, and I can tell there are things inside of it. How can I tell? Just listen!” Shake the box. “What do you think is in here?” Field answers as time allows. “Could be any of those things!  But look, on here is also a tree stump with this little twig coming out of it. It reminds me of what the prophet Isaiah said today that sometimes, out of things that don’t look alive anymore, new things can spring. And look, it has writing on it!  Can someone read it?   If the children are too young or too shy to read, go ahead and read it aloud:

At Christmas God does something new

And we can do something, too!

With each day comes the chance

To make another heart sing and dance!

Do something kind without pay

“Huh, I wonder what that means. Should we open it and see what’s inside?” Open the box dramatically.  If it has a lid, unveil it with panache. If it is sealed in wrapping paper, invite the children to help you tear it open. Show the box full of stickers, and the other box inside.

“Wow, there’s a bunch of stickers in here, along with some other boxes. This other box we can’t open until next week, I think, but what do we do with these stickers?” Pretend to think.

“Wait, I have an idea!  Come in close.” Invite the youth forward and turn off your mic. “The riddle invited us to go and make someone’s day, so I think you should go out there to the people in the pews and stick a sticker on someone. Make it someone you don’t even know! Put it on their hand, their shirt, or even their forehead! Go and spread some love today with this new thing in church, and next week we’ll see if God has a new surprise for us in these boxes. Are you ready? Go!”