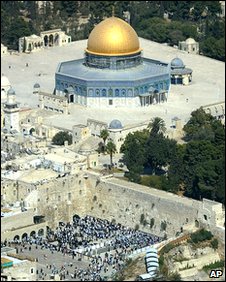 The Dome of the Rock and the Western Wall in Jerusalem on a hotly-contested spot of land in East Jerusalem.

Today, church leaders in the United States made public their response to the communique issued by the Heads of Churches in Jerusalem regarding the current status of the Israeli-Palestinian conflict. Both documents were produced in September.

In their statement, the U.S. heads of churches, in the context of the Arab Spring, “recognize the complex and difficult situation regarding the current and future realities of the Middle East.” Beyond developments in the region, however, the church leaders voice their dismay “that the Obama administration has actively opposed Palestinian efforts to achieve a just resolution to the Israeli-Palestinian conflict through appeal to the United Nations.”

Click below for the full text of each communication (in PDF format):

Sept. 12, 2011 – Communique from the Heads of Christian Churches in Jerusalem

Sept. 30, 2011 – Response to Communique by Heads of Churches in the United States