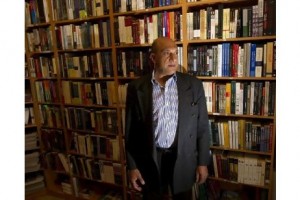 Israel is in the process of expelling Munther Fahmi, "the bookseller of Jerusalem." Photo from The National website.

Imagine that you were told you were not allowed to live in the city in which you were born or grew up.  That is what has happened to 14,000 East Jerusalem Palestinians since the Israeli occupation began in 1967, and the pace has been accelerating.  In 2008 alone, the last year records are complete, 4,500 residency permits were rescinded.

When Israel began the occupation in 1967, most Palestinians were not made citizens but residents, which came with restrictions.  If you leave Jerusalem for an extended period of time to live elsewhere (including other parts of the West Bank), your residency rights can be rescinded.

Munther Fahmi is known as “the bookseller of Jerusalem” because he runs the bookstore at the exclusive American Colony Hotel in East Jerusalem which serves such guests as Tony Blair, Kofi Annan and Jimmy Carter, to name a few.  This bookstore is known as an “oasis of dialogue” in a country riddled by conflict, says writer Jonathan Cook, because there are many dialogue events featuring writers on all sides of the conflict.

But despite Munther’s many famous friends who have written letters and the good work his bookstore does, Israeli officials have told him that they will no longer automatically issue him the tourist visas he needs to live there year-round.  His residency rights were already rescinded because he has a US passport and lived away for a number of years before returning in the early 90s after the Oslo Agreement.  Now, he may well have to leave Israel and the occupied Palestinian territory altogether, and possibly be re-admitted for only 3 months a year, if that.

Read more about it in Jonathan Cook’s article, The Jerusalem Expulsions.

Read more about this and other issues related to Jerusalem in the March UN report East Jerusalem:  Key Humanitarian Concerns.