Tell your representative no on punishing Palestine 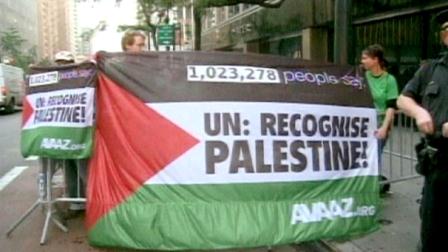 This new alert from Churches for Middle East Peace urges constituents to contact their members of congress and dissuade them from signing on to a letter to President Obama that would punish Palestinians for their successful bid to raise their status to non-member state at the UN:

Members of Congress are still seeking to punish the Palestinians for elevating its status at the UN last month. A bi-partisan group is asking other House Members to sign a letter to President Obama asking him to close the PLO mission in DC, recall the U.S. Consul General in Jerusalem who works with the Palestinian Authority, and cut off funding to any other UN body that admits the Palestinians as a member. The letter is being circulated by Reps. Ileana Ros-Lehtinen (R-FL), Howard Berman (D-CA), Edward Royce (R-CA), and Eliot Engel (D-NY).

The measures recommended in the letter are ill-conceived and self-defeating. The Members state that direct talks are the only way to resolve the outstanding issues between Israelis and Palestinians, but the measures they propose would undercut U.S. diplomacy and make it harder for direct talks to take place. Cutting off funding to UN agencies would deprive the U.S. of the benefits those bodies bring to U.S. national interests around the world.

From the letter to the President:

Your Administration discouraged the Palestinian leadership from pursuing non-member state observer status at the United Nations and took a firm stance in both voting “no” and encouraging other nations to do the same, and we appreciate those efforts.

We are deeply disappointed and upset that the Palestinian leadership rebuffed the entreaties of your Administration and the Congress and insisted on pursuing this distinctly unhelpful initiative. This Palestinian action violated both the letter and spirit of the Oslo Accords, and it opened the door for expanded Palestinian efforts to attack, isolate, and delegitimize Israel in a variety of international forums—a threat which, even if unrealized, would hang over Israel’s head during any future negotiation or any effort by the Israeli government to defend its citizens from terrorism.