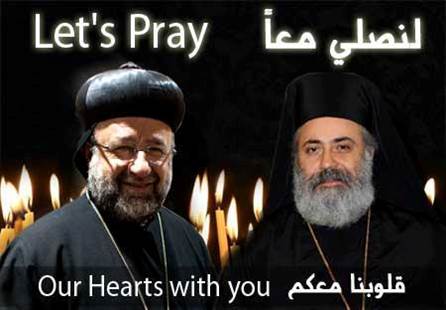 Please pray for all the people of Syria, including Greek Orthodox Bishop Boulos Yazigi and Syriac Orthodox Bishop Yohanna Ibrahim from Aleppo,
whose whereabouts are still unknown since they were kidnapped earlier this year. May the spirit of peace, justice and reconciliation fill the hearts and minds of all those in that troubled region.

An ELCA action alert today urged constituents to contact President Obama and Members of Congress to condemn the use of chemical weapons and to urge restraint and encourage non-violent means to resolve the 2-year-old civil war in Syria that has claimed 100,000 lives.  The US has recently threatened the Assad regime with military strikes in retaliation for alleged chemical weapons attacks, the most recent of which killed over 1400 people.  Early this week, ELCA Presiding Bishop Mark S. Hanson sent a letter to President Obama asking him to continue diplomatic efforts rather than pursuing military action in Syria.  According to the statement:

The use of chemical weapons in Syria is heinous and inexcusable. These atrocities are an assault on human dignity, and violate international standards and law. However, the people of Syria, along with many others in the Middle East who are living through this time of profound instability, deserve our concern, compassion and accompaniment, not the escalation of an already horrendous war.

Write to President Obama  |  Write to Members of Congress

Middle East Christians Speak out Against Military Action Against Syria:

…these Eastern Christians are solidly against an American missile strike on Syria. Many US congressional representatives discussing the possibility of military action against that country invoked God and prayer in their remarks, lending the discussion a Christian ambiance. But they didn’t refer to any statements on the crisis by actual Syrian or Lebanese Christians (the two are closely linked).

Earlier this week, the General Secretary of the National Evangelical Synod in Syria and Lebanon sent an urgent letter to its partner church, the Presbyterian Church USA, advocating a non-violent response to chemical weapons attacks in Syria:

We urge the international powers to refrain from the use of power against Syria as any strike from the USA or any other power will only multiply the suffering and human destruction.  We appeal to all who are able, by the name of the God of love, to help bring violence to an end.  Stop financing, arming and sending foreign groups to fight in Syria – help the Syrians to come together to build a new Syria.
Rev. Fadi Dagher, General Secretary of the National Evangelical Synod of Syria and Lebanon

While the use of chemical weapons is wrong, the forms of intervention being predicted thus far can do little to bring a positive outcome…  Such military intervention threatens to bring even greater suffering and instability to communities throughout Syria and the region as a whole … The situation in Syria will be solved not with bombs but with diplomatic efforts and true dialogue among Syrians of goodwill … To choose the path of diplomacy brings the Middle East closer to the goal of peace. Such a choice is not weakness, but the sign of peace and security.

The people of Syria deserve better, safer and more just lives based on more respect for their human rights – but these must be brought about, by Syrians themselves, within their own context. External intervention will cause further destruction and push the Syrian people further into relentless civil war.

Kairos Palestine condemns the calls for war, and we urge countries around the world – whether Western states or regional ones – to help Syria maintain itself, broker peace among all Syrian parties involved, and stop supporting any armed groups entering from outside the country.

Similar statements have come from:

Read religious leaders commenting on whether an attack on Syria would be considered a “just war.”

Please keep the people in Syria in your prayers, advocate for peace with justice with your faith, political and community leaders and ask that God strengthen and inspire the people who can bring justice, peace and reconciliation out of the chaos and brokenness.

On the Ground from the Nygards in Cairo 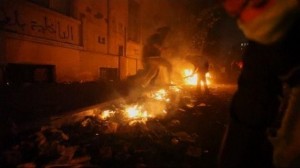 Recent renewed violence in Cairo has claimed the lives of over 30 people. Picture from BBC website.

Continuing violence that claimed the lives of about 38 people in Cairo has left the area mourning, angry and uncertain, despite an official apology from the military and a promise that parliamentary elections will actually begin to take place next week as planned.  Elections under former President Mubarak were heavily influenced by his police, which denied access to the polls for many against the regime.  Protestors are asking for the military to give up power now, but that is not scheduled to happen even after this election.   Read analyses of Egypt’s situation, especially Egypt’s Democracy.

Our prayers continue to be with those who have suffered from violence and death, our ELCA missionaries there and all of the companions and people of the country, that wisdom and justice would overtake the fear.

Professor Mark S. Nygard, an ELCA missionary in Cairo, penned these words to his sponsors to give a feel for what it’s like there on the ground:

My taxi driver thought I should get a glimpse of it live, this
morning on my way back from Arabic class. On his own initiative he
stopped his car on the Sixth of October overhead freeway opposite the
Egyptian Museum from the square itself, and we peered between the
buildings toward the stopped cars and the crowds beyond. He said he
was going to go down there himself after work today. So did my
seminary student tutor, Amgad. Two of the international students at
the International Language Institute had been on the square the day
before, and Charlie, a Brit from Exeter, said it wasn’t pretty what he
had seen – bloodied faces and bruised bodies. Another student, Maya,
used break today to announce the request for medical aid for the
square at drop-off points around the city. Dr. Magdi, seminary vice
president, counselled us to go home during the daylight hours this
week. On my way this afternoon, I found the usually crowded parking
places on Abbasia Street empty.

So… on the one hand, we are quite conscious of the conflict and we
have stores of water, food, and money to try to be ready for any
disruption that might be necessary. On the other hand, our days
continue on under the press of our own schedules and ministries as if
nothing at all was unusual. Fall semester classes are now two-thirds
over, Aisha of Maa’di discusses connectors of direct and indirect
objects to Arabic verbs, Philip Friesen of St. Paul offers November
guest lectures on social change, I prepare for a Scholar’s Seminar
called “1960 and 2010: Missiology Then and Now,” my Dutch colleague,
Willem, offers a daring way better to manage our challenging
curriculum, and in the midst of it all, a French missionary teacher
friend needs us to babysit a kitten for five days, and this, in an
apartment where pets are forbidden. Things don’t simply shut down
because a country is struggling to determine its destiny! Our life is
full.

In the August 26 CMEP bulletin, read updates on escalating violence in Israel and the occupied Palestinian territories, Egypt/Israeli diplomatic tension, the continuing controversy about Palestinian statehood through the United Nations and other items.