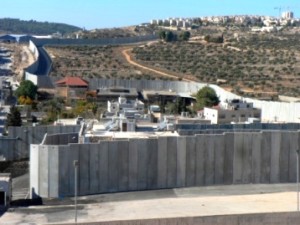 All the land you see is Palestinian land. The Israeli separation barrier has been used to loop in and take land into the Israeli side of the barrier (to the right of the barrier). Here, a view from a Bethlehemite’s house looking over the barrier to Gilo, one of the larger settlements in East Jerusalem.

The report on the implications of the Israeli settlements on the civil, political, economic, social and cultural rights of the Palestinian people has been released by the UN international fact-finding mission, concluding that the settlements violate a “multitude” of human rights of the Palestinians and that “these violations are all interrelated, forming part of an overall pattern of breaches that are characterised principally by the denial of the right to self-determination and systemic discrimination against the Palestinian people which occur on a daily basis.”

The chair of the mission, Ms. Christine Chanet from France, said the report concludes that “in compliance with Article 49 of the Fourth Geneva Convention Israel must cease all settlement activities without preconditions.”

The report details how the Israeli governments since 1967 have openly led, directly participated in, and had full control of the planning, construction, development, consolidation and encouragement of settlements.

“We are today calling on the government of Israel to ensure full accountability for all violations, put an end to the policy of impunity and to ensure justice for all victims,” said Ms. Asma Jahangir, member of the Mission from Pakistan.

The report states that Israel is committing serious breaches of its obligations under the right to self-determination and under humanitarian law. The report also concludes that the Rome Statute establishes the International Criminal Court’s jurisdiction over the transfer of populations in the Occupied Palestinian Territory.“The magnitude of violations relating to Israel’s policies of dispossessions, evictions, demolitions and displacements from land shows the widespread nature of these breaches of human rights. The motivation behind violence and intimidation against the Palestinians and their properties is to drive the local populations away from their lands, allowing the settlements to expand,” said Ms. Unity Dow, member of the Mission from Botswana

The International Fact-Finding Mission: Israeli Settlements in the Occupied Palestinian Territory was established by Human Rights Council Resolution 19/17 in March, 2012, which decided to “dispatch an independent international fact-finding mission, to be appointed by the President of the Human Rights Council, to investigate the implications of the Israeli settlements on the civil, political, economic, social and cultural rights of the Palestinian people throughout the Occupied Palestinian Territory, including East Jerusalem.” 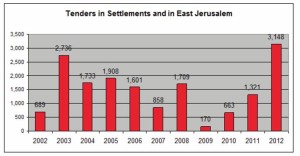 Tenders for illegal settlement units in East Jerusalem have ballooned during Prime Minister Netanyahu’s leadership. This chart is from the UN report above.

Recently, another report criticized the settlement enterprise.  A Peace Now report concluded that Israel’s settlement policies since Israeli Prime Minister Benjamin Netanyahu have been a direct threat to the two-state solution:

The current government, led by Benjamin Netanyahu, took office on March 31, 2009. In the period since, its policies and actions in the West Bank and East Jerusalem disclose a clear intention to use settlements to systematically undermine and render impossible a realistic, viable two-state solution to the Israeli-Palestinian conflict.

Israel decided Monday, March 26, to sever all contact with the United Nations human rights council and with its chief commissioner Navi Pillay, after the international body decided to establish an international investigative committee on the West Bank settlements.

The Foreign Ministry ordered Israel’s ambassador to Geneva to cut off contact immediately, instructing him to ignore phone calls from the commissioner, a senior Israeli official said.  They also decided that they will not permit any officials related to this initiative into the country.

Foreign Minister Avigdor Lieberman called the move “diplomatic terror,” and Israel was reportedly considering sanctions against the Palestinians for supporting it.  Read more

It is interesting that these events happened just after a report by the Israeli human rights organization B’Tselem released a bleak report on human rights in the occupied Palestinian territories, stating that the largest human rights violations are precisely because of the settlements: The report states:

The picture is harsh – not because of dramatic events or a sudden deterioration, but precisely because of the routine. This year, we enter the 45th year since Israel occupied the West Bank and Gaza Strip. What was supposed to be a temporary situation appears firmly entrenched with no change in sight.

In the West Bank, two and a half million Palestinians live under Israeli military occupation while settlers live in enclaves of Israeli law within the same territory. Individual acts of violence by extremist settlers periodically capture the headlines, and discriminatory and inadequate law enforcement is indeed a concern. However, the major human rights violations result from the settlements: their extensive exploitation of land and water, the massive military presence to protect them, the road network paved to serve them and the invasive route of the Separation Barrier, which was largely dictated by the settlements. Israeli civilians living in the West Bank are also subject to violence. This year, five members of the Fogel family were shot and stabbed to death in their home in the Itamar settlement, and a father and his infant son were killed when their car crashed after rocks were thrown by Palestinians.