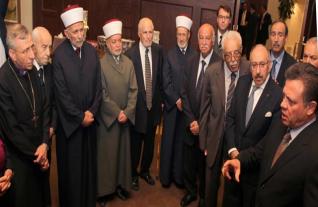 Sunday, August 12, His Majesty King Abdullah II hosted an iftar banquet for Muslim scholars and Christian leaders. The banquet was held at Basman Palace in Jordan. One of those attending was the Rt. Rev. Munib Younan, far left, Bishop of the Evangelical Lutheran Church in Jordan and the Holy Land and President of the Lutheran World Federation.

Sources say as many as 2 million people have come to Jerusalem to celebrate Eid al-Fitr, the celebratory end of the holy month of Ramadan.

On the night of 14th August, Palestinian Jerusalemites and West Bankers came together in the Holy City to celebrate Laylat al-Qadr, the holiest night of Ramadan upon which Muslims believe that the first revelation of the Quran was delivered to the Prophet Muhammad in 610 CE.

Over 200,000 Palestinians gathered at Al Aqsa Mosque to perform Itikaf (the overnight retreat into the Mosque and reading of the Quran), which went on deep into the early hours of the morning.

The Old City was said to have a liberated feel for a night as crowds swarmed through the Damascus Gate, surging down the Old City’s packed-out alleyways to reach the deeply symbolic site of Haram al-Sharif. The sheer number of people totally overwhelmed the city’s infrastructure.  Israeli authorities, in an unprecedented move, did not place a quota on the number of permits to be issued to Palestinians: all Palestinian women and men (over the age of 40) were allowed to enter Jerusalem with only minimal supervision by Israeli security.