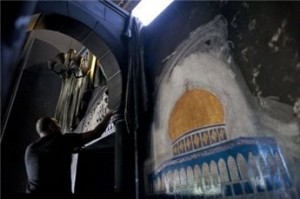 Flaming tires were thrown into a mosque in the Northern West Bank town of Burkin near the settlement Ariel Wednesday, according to Burkin’s mayor, and two cars were torched. The attacks are believed to be the latest in a string of so-called “price-tag” attacks by angry Israeli settlers against local Palestinians. These attacks are called “price tag” attacks because they are allegedly made by Israeli settlers if there is any progress toward removing illegal Israeli settlers from occupied Palestinian land. Several mosques have been burned in the past few months in similar incidents. In this case, only the entrance was burned, but graffiti was sprayed all over the mosque denouncing the head of the Shin Bet’s Jewish division, responsible for tracking extremist activity. Read Haaretz article.

Settler-related incidents resulting in Palestinian injuries and damage to property are up more than 50 percent this year, according to the UN Office for the Coordination of Humanitarian Affairs, which documents violence in the Palestinian territories.

The Council of Religious Institutions of the Holy Land, made up of top Christian, Jewish and Muslim leaders, including LWF President and ELCJHL Bishop Munib Younan, denounced the attack and issued this statement:

The Council of Religious Institutions of the Holy Land condemns the acts of desecration of the mosque in the village of Burkin in the northern West Bank yesterday. The Council calls upon people from all faiths – Christians, Jews and Muslims – to respect all Holy Places and sites for all three religions, and strongly discourages extremists’ behaviour that exploits or involves religion in a political/territorial dispute.