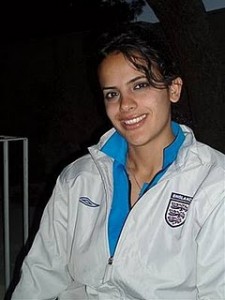 “It’s not only about playing football. It’s about living in Bethlehem, the city of peace, and delivering the message that we are humans and that we have rights.  Through football, we can change the world because football is a language that everyone understands.”

“We have no where else to go and nowhere to put our energies.  We are just playing with our souls and spiritual abilities. It’s because we are strong, we are Palestinian, we face a lot of difficulties. We want to be something.”

So says Honey Thaljieh, a graduate of the ELCJHL Lutheran schools “who has emerged to revolutionize Palestinian attitudes about women’s sports and has taken up what one might call sports diplomacy, making it all the way to the White House with Hillary Clinton,”  explains ELCA missionaries Pastor Fred and Gloria Strickert in their blog, Walk in Jerusalem.

Read the full story there and be inspired by this young woman who channels her energy and passion into “sports diplomacy,” showing people – including US Secretary of State Hillary Clinton, whom she recently met – that Palestinians are people with dreams and aspirations just trying to make better lives for themselves.